Dynasties of Bihar include Gupta dynasty, Yaduvanshis and Kachwaha dynasty and few other lesser prominent ones. Bihar has experienced various invasions from different dynasties.

Starting from the Neolithic age to 1600 century Bihar was ruled by large and small dynasties. As sometimes it was occupied under whole of India as in the case with The Gupta dynasty , Mughal Empire etc. and on other times it was ruled by local dynasty without much impact from outside.

Dynasties of Bihar comprised of the imperial Gupta Empire, Yaduvanshis and Kachwaha dynasty

The history of dynasties of Bihar starts with that of Gupta dynasty. In the twelfth century, a Gupta dynasty ruled from Jayapura, identified with modern Jayanagar, near Lakhisarai District in the Munger. King Yajnesagupta, was succeeded by Damodaragupta. His successor was king Devagupta. These three kings were feudatories of the Pala Dynasty. Devagupta was descended by son Maharajadhiraja Mahamandalika Rajadityagupta. His son Rajaputra Krishnagupta died before him. Rajadityagupta was succeeded by his grandson Maharajadhiraja Mahamandalika Samgramagupta. He ruled for more than seventeen years. Muhammad Bakhtyar Khilji had destroyed the Gupta power.

Pithi region is known to have been ruled by the Sena dynasty which included the region round Gaya. He was succeeded by his sons Buddhasena and Jayasena in second half of thirteenth century. The Karavala dynasty ruled in the Shahabad district, which formed part of Magadha, in the twelfth century AD. Sadhava is the earliest known member of this family. His son was king Ranadhavala, whose son Pratapadhavala is referred to as a Mahanayaka of Japila. His son and successor was king Sahasa. His two sons Vikrama and Indradhavala occupied the throne of their father in succession. Nothing definite is known of the family. A king named Pratapa, who is known to have been ruling in the Shahabad District in 1223 AD, might have been a successor of Indradhavala.

The Kachhawas belong to the Suryavanshi lineage, which claims descent from the Suryavansha of the ancient Kshatriyas. The Kachwahas or Kacchapghata dynasty was originally from Bihar who founded Gwalior and Narwar in the 8th century. A descendant of this dynasty Dulah Rai established his rule in Dhundhar in the eleventh century. The Kachchhapaghatas are generally considered to be the ancestors of the Rajput clan Kachwaha, but this has no historical substantiation. Three branches of this dynasty ruled in Gwalior, Narwar (Princely State of Narwar) and Dubkund.

The earliest known chief of the Gwalior branch is Lakshman. Gwalior was under the sway of the Dhanga, the king of Chandella Dynasty a feudatory of the Pratihara Vinayakapala of Kannauj. Maharajadhiraja Vajradaman, son of Lakshman, defeated the king of Gandhinagar who may be identified with the Pratihara Vijayapala. Vajradaman was followed in succession by Marigalaraja and Kirttiraja respectively. Kirttiraja revolted an attack of the king of Malava. It is probably Kirttiraja who surrendered to Mahmud of Ghazni when the latter invaded Gwalior

The known ruler of the family of Kachwaha family who ruled Chadoba is Arjuna, the son of Yuvaraja, and a feudatory of the Chandella Vidyadhar. He killed the Pratihara Rajyapala of Kannauj. His son and successor Abhimanyu was an ally of the Paramara Bhoja. Abhimanyu was succeeded by his son Vijayapala, who was succeeded by his son Vikramasimha. A third branch this dynasty ruled in Narwar, the ancient Nalapura. Gangasimha was the first ruler, his successor Saradasimha, and the latter’s successor was Virasimha.

A Yadu dynasty has ruled in Bayana, the ancient name of which was Sripatha. The kingdom of this dynasty includes the old Bharatpur State and the Mathura district. King Jaitapala ruled in the first half of the eleventh century. His successor was Vijayapala. Again he was succeeded by Tahanapala who, according to tradition, built the fort of Tahangarh. Tahanapala was followed in succession by Dharmapala, Kunwarpala and Ajayapala. An inscription says that Haripala was the son and successor of Ajayapala. Haripala was succeeded by Sohapala. It is believed that Anangapala was the successor of Sohapala. Anangapala was followed in sequence by Prithvipala, Rajapala and Trilokapala.

Chirand, situated on the northern bank of the

Ganga River in Saran district has continuous archaeological record from the Neolithic age (about 2500–1345 BC). The occupational categorization in Chirand covers three periods –

1100-500BCE: Mithila region of Bihar became the centre of Indian Power in the later Vedic Period under the rule of Janaks. Sita, a daughter of one of the Janaks of Mithila is mentioned as the consort of Lord Rama, in the Hindu epic, Ramayana, written by Valmiki.

Around 500-around 300 BCE: Foundation and rule of world’s first republic, Vajji, a confederation of various clans, in the Mithila region of present-day Bihar with capital at Vaishali and Lichhivis are the most powerful clan of Vajji. 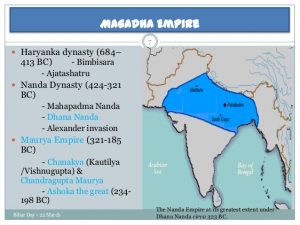 Around 6th century-11th century: The rule of Pala and Sena dynasty in Mithila region.

1540-1555: Building of the Grand Trunk Road, Introduction of the Rupee and Custom Duties

1556: Mughal dynasty regains control of Agra after the Battle of Panipat.