Shiv Das Meena assumed the charge of Chairman of Patna Metro Rail Corporation Limited (PMRC). He belongs to the 1989-Batch IAS officer of Tamil Nadu cadre and an additional secretary and CVO in the Ministry of Housing and Urban Affairs (MoHUA). Meena took charge of Chairman, PMRC, on December 14, 2019.

Bihar government nominated five members in the Board of directors of PMRC, including principal secretary Chaitanya Prasad who is acting as the Managing Director. The state government needs to get prior approval of the Central government in future decisions related to the Patna Metro rail project.

WHO approved a biosimilar medicine for breast cancer

The World Health Organization (WHO) has now approved a biosimilar medicine that is derived from living sources instead of the chemicals. The aim is to make breast cancer treatment affordable to women globally. This approval from WHO is first of such kind.

The Trastuzumab drug has proved high efficacy in curing early-stage breast cancer and in some cases more advanced forms of the disease. The annual cost of the drug is $20,000. This high amount makes it out of reach of many women and healthcare systems in most countries.

The biosimilar version of Trastuzumab is 65% cheaper than the original.

The US National Science Foundation (NSF) reported that India has become the world’s third-largest publisher of science and engineering articles. It has published over 1.35 lakh scientific papers. China topped the report as the world’s largest publisher.

It also said that science and engineering (S&E) journal articles and conference papers, grew about 4% annually over the last 10 years.

The Asian Development Bank (ADB) and the Government of India signed a $250 million loan to Energy Efficiency Services Limited (EESL). The agreement aims to expand energy efficiency investments in India.

The agreement is expected to benefit residential, agricultural, and institutional consumers.

The Clean Technology Fund (CTF) will provide $46 million in financing. It will be administered by ADB.

In 2016, EESL was offered a $200 million by ADB for Demand-Side Energy Efficiency Sector Project. The project focused on efficient lighting and appliances.

Government launched the sale of ‘Khadi Rumal’. It was launched by the Union Minister for Micro, Small and Medium Enterprises (MSME) Nitin Gadkari. He announced 50% increase in the remuneration of women workers to Rs.3 per piece from Rs.2 per piece presently.

Khadi and Village Industries Commission (KVIC) has signed an agreement with Paytm to increase the outreach and availability of these Rumals through a digital platform. It has committed to sell 2 Crore packets of Khadi Rumal through its online and offline platforms and mobile application.

Khadi Rumal sale aims to create employment opportunities for the women in the terrorist affected areas. They are stitched by the women of Nagrota town in J&K. The turnover of the village industries in the country is Rs.75000 crore. The move aims to increase the turnover by Rs.1,00,000 crore by March 2020.

KVIC has set the target to sell 5 Crore pieces of Khadi Rumal initially.

In order to create 5 Crore pieces of Khadi Rumal, nearly 15 lakh Kgs of cotton will be consumed. 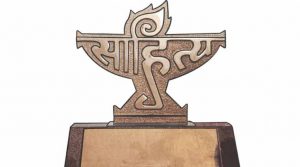 In Sanskrit, Penna Madhusudan will get the award for his Poetry ‘Prajnachakshusham’ and in Urdu, Shafey Kidwai will be awarded for his Biography ‘Sawaneh-E-Sir Syed: Ek Bazdeed’.