Impact of globalization on india

Globalization helps developing countries to deal with rest of the world increase their economic growth, solving the poverty problems in their country. In the past, developing countries were not able to tap on the world economy due to trade barriers. They cannot share the same economic growth that developed countries had. However, with globalization the World Bank and International Management encourage developing countries to go through market reforms and radical changes through large loans. Many developing nations began to take steps to open their markets by removing tariffs and free up their economies. The developed countries were able to invest in the developing nations, creating job opportunities for the poor people. For example, rapid growth in India and China has caused world poverty to decrease.

China and India have become global economic powers. Even at the market exchange rate, China overtook Japan in 2010 as the second largest economy. China’s trade and financial activities, India’s emergence as a technology and innovation hub, and both countries’ commerce and investment interactions with other developing nations have been covered extensively in all forms of media. They are regarded as economic and political drivers of the international economy, particularly in the trade arena and global governance. Their economic engagement with developing countries and regions entails interactions in the areas of labour, human rights, international relations, security, and environmental sustainability. The potential threats are mostly associated with trade and financial flows, and with the social and political implications of China’s financial outflows. Nevertheless, in the midst of the recent global economic crises, China and India’s demand for developing country goods proved to be a cushion to the declining flows of resources from advanced nations. China and India influence global economic and political dynamics, and can provide alternative sources of development assistance for developing countries. They can also provide a number of potential lessons for other developing countries, three of which are highlighted in this article: absorption of surplus labour, raising of domestic and foreign investment, and support for R&D.

The South Asian region is also full of contradictions, disparities and paradoxes. In the post-colonial period, the South Asia has been a theatre of bloody inter-state as well as civil wars; it has witnessed liberation movements, nuclear rivalry, military dictatorships and continues to suffer from insurgencies, religious fundamentalism and terrorism, besides serious problems associated with drugs and human trafficking. The region also has the dubious distinction of having over 540mn people who earn less than $ 1.25 a day and account for 44% of developing world’s poor. The region has produced several powerful female leaders and yet in the overall much remains to be done for the empowerment of women. On the barometer of religious tolerance, the constituent countries range anywhere between flexible secular minded and rigidly fundamentalist.

The South Asian Association for Regional Cooperation (SAARC) has remained in existence for over 27 years; yet South Asia is considered as the least integrated of the global regions; this is despite the stipulation in its Charter that “bilateral and contentious issues shall be excluded” from its deliberations, thus making it possible to put the contentious issues on the back burner and focus on areas of possible cooperation. 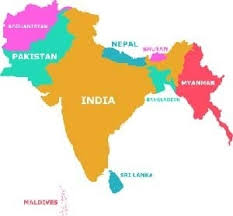 On the positive side, the region has been registering a healthy growth (average 6% per annum) during the past several years. Also democratic forms of governance (howsoever flawed and feeble) are beginning to gain some ground in most parts of the region.

Where does India stand in this rather volatile region? India’s position is unique in more than one sense. As a matter of an interesting geographic factor, India shares borders with all other South Asian nations whereas no other South Asian nation (except Afghanistan and Pakistan) shares borders with any other South Asian nation. Notwithstanding some shortcomings, democracy and rule of law as instruments of political governance are well entrenched in India. Transfer of power has been more or less peaceful and transparent. In relative terms India can be arguably considered as the most stable country in the region, moving ahead on the fast tracks of development, even though the growth has of late slowed down.

Further in terms of its population, territory, GDP, its image as an emerging world economy and a responsible de-facto nuclear State, and as a country which is destined to play a larger role on international arena, and also for several other reasons, India stands apart amongst the bunch of other South Asian countries. In fact India can be said to dwarf others in the South Asian region which in turn has created misperceptions about India and its intention.

There are unjustified and erroneous perceptions about India floating around in the region: “Big Brother bullying the smaller neighbour”; “India treats its neighbours as a neglected backyard” etc. etc. There is no justified explanation for the “trust deficit”. On top of it there are vested interests and lobbies for whom being anti-Indian is synonymous with being patriot and nationalist. And then there are strong institutions within the framework of a more or less failed and rogue State in the neighbourhood (Pakistan) which would like to see relations with India in a state of perpetual suspension. India’s motives are suspected even in cases of innocent proposals for economic cooperation which would lead to win-win situations.