Environmental concerns of tourism industry, both positive and negative effects including climate change with reference to Himachal Pradesh

All too often, the environment is the ultimate victim of development and expansion. Growth pressures have seen Dharamshala’s boundaries encroach on previously untouched land as the local population and tourist demands stretch infrastructure and services beyond their limits. Whilst tourism is not the only causal factor, development associated with tourism has certainly intensified environmental problems.

The most significant affect of tourism is the increased pressure on the fragile Himalayan ecosystems. Increased construction and transport has lead to large-scale deforestation and destabilisation of natural ecosystems; Despite laws and regulations to prevent illegal culling, forests are still illegally cut for wood collection or land clearing . Deforestation has also caused a greater risk of landslides whilst loss of habitat has resulted in the further decline of rare and endangered species.  Furthermore, tourism has generated increased waste production, which is a serious issue due to inadequate waste disposal and management systems in the Dharamshala region. Consequently, waste litters roadsides, trekking trails, scenic areas and rivers, spoiling the aesthetics of the environment and damaging and polluting the local ecosystems. 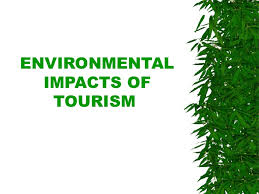 An increase in motorized vehicles in Dharamshala region has reach epic proportions and is one of the biggest visible changes in the area, causing congestion and chaos. Large tourist buses, transport vehicles, and three wheeler auto rickshaws are causing a major transportation and pollution issue. This uncoordinated transport system has lead to greater air pollution with potentially damaging consequences for local ecosystems and community health.

Moreover, a lack of or unenforced development planning has facilitated sprawling hotel developments, especially in the Upper Dharamashala tourist locations of Mcleod Ganj, Bhagsu and Dharmkot areas. These facilities have caused traffic congestion, pollution and aesthetically degraded the natural environment. The unregulated construction of these hotels and recreation facilities has also increased sewage pollution. Wastewater runoff has caused pollution to the soil, affecting local agriculture and the health of humans and animals in the area.

The depletion of natural resources, especially water, is of great concern in the Dharmashala area. The unregulated increase in hotels in the region has caused severe water shortages in the summer months, whereby water is now severely rationed. However, many hotels illegally steal water from pipes further up in the mountains, restricting the local community access to water. In the summer of 2013, the water supply was unavailable for more than 5 days in parts of Naddi village due to this illegal practice. Similarly, tourism has put great pressure on energy resources that is already in short supply. During the summer and winter months, electricity supply in Dharamashala is irregular due to extreme weather changes and the demand of hotels and tourists on these limited power resources.  Whilst tourism certainly exaggerates environmental problems in Dharamashala, a number of existing local factors also exist which create or amplify these problems from the outset. For example, lack of public awareness regarding environmental issues, waste management, and the health effects of trash burning or disposal in waterways is a long-standing issue. Further, the almost non-existent individual and government waste management system does not encourage waste minimization or recycling practices A lack of government control and lack of enforcement of environmental issues also compounds the problem.

Climate change is a major global environmental problem. Tourism directly contributes to climate change through carbon emissions produced by transportation and accommodation, energy usage, construction and services and products that support tourists. It is therefore critical for the tourism sector to recognise and assess their contribution to the issue and understand the impact of climate change on the industry.

Changes in glacier movements are the most visible and accurate indicators of climate change in a given region. The Himalayan river flow is influenced by seasonal monsoon rainfalls as well as snow and ice melt throughout the summer season. Monitoring of these systems is an important method of assessing the overall health of the reservoir system. During the period between 1972 and 2006, 224 glaciers were mapped revealing that the average glacier receded from 419 to 371kms in the Beas basin in Himachal Pradesh. Several rivers in northwest India rely on the melt water of these glaciers and up to one fifth of the world population rely on seasonal glacial melting, which acts as a crucial lifeline for more than one billion people.

Thus, the Himalaya’s are experiencing climate change at an unparalleled rate, with increases in natural disasters such as flash floods and landslides along with extreme climate variability. It is predicted that the Himalayan region will be one of the worst hit by climate change in India with a projected warming of up to 1.5 degrees by 2020. The impacts of climate change are most often felt by marginalised or disadvantaged sectors of society and those dependant on climate sensitive sectors such as agriculture and forestry . Lack of services and infrastructure limits their ability to manage the negative effects of climate change.

Tourism both affects climate change and is affected by it. Air travel is a major component of tourism and accounts for around 5% of carbon emissions, significantly contributing to global warming. Yet the aviation industry continues to expand to respond to the increasing demand of tourists, with more competitive airlines reducing the prices of domestic and international travel, making it even more affordable.

As a developing country, India will be unable to protect against the full impacts of global warming which will effect local populations and climate sensitive sectors such as tourism. With the majority of the population relying on natural resources such as agriculture and forestry, India faces a major threat that will require a serious change of course in order to combat climate change.