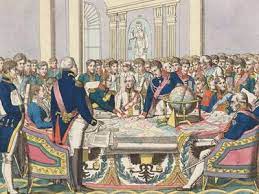 Following the defeat of Napoleon in 1815, European governments were driven by a spirit of conservatism. Conservatives believed that established, traditional institutions of state and society – like the monarchy, the Church, social hierarchies, property and the family – should be preserved. Most conservatives, however, did not propose a return to the society of pre-revolutionary days. Rather, they realised, from the changes initiated by Napoleon, that modernisation could in fact strengthen traditional institutions like the monarchy. It could make state power more effective and strong. A modern army, an efficient bureaucracy, a dynamic economy, the abolition of feudalism and serfdom could strengthen the autocratic monarchies of Europe.

In 1815, representatives of the European powers – Britain, Russia, Prussia and Austria – who had collectively defeated Napoleon, met at Vienna to draw up a settlement for Europe. The Congress was hosted by the Austrian Chancellor Duke Metternich. The delegates drew up the Treaty of Vienna of 1815 with the object of undoing most of the changes that had come about in Europe during the Napoleonic wars. The Bourbon dynasty, which had been deposed during the French Revolution, was restored to power, and France lost the territories it had annexed under Napoleon. A series of states were set up on the boundaries of France to prevent French expansion in future. Thus the kingdom of the Netherlands, which included Belgium, was set up in the north and Genoa was added to Piedmont in the south. Prussia was given important new territories on its western frontiers, while Austria was given control of northern Italy. But the German confederation of 39 states that had been set up by Napoleon was left untouched. In the east, Russia was given part of Poland while Prussia was given a portion of Saxony. The main intention was to restore the monarchies that had been overthrown by Napoleon, and create a new conservative order in Europe.