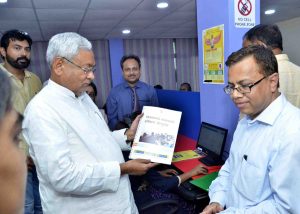 ð President Pranab Mukherjee has approved the promulgation of The Prevention of cruelty to Animals (Karnataka Amendment) Ordinance, 2017 by the Governor of Karnataka in pursuance of Article 213 of Constitution. The promulgated ordinance legalises Kambala, bullock cart races and bull runs as traditional sports involving animals and exempt them from The Prevention of Cruelty to Animals Act, 1960.

ð Kambala is the traditional slush track buffalo race that is held annually in coastal districts of Karnataka to entertain rural people of the area. Slushy/marshy paddy field track is used for Kambala. The sports season generally starts in November and lasts till March. The contest generally takes place between two pairs of buffaloes, each pair race in two seprate wet rice fields tracks, controlled by a whip-lashing farmer. In the traditional form of Kambala, buffalo racing was non-competitive and buffalo pairs ran one by one in paddy fields. Besides, there was also ritualistic approach as some agriculturists race their buffaloes as a means to thank the god for protecting their animals from disease. But in recent times, Kambala has become an organised rural sport.

ð The blueprint being framed by the National Council For Teacher Education (NCTE), promises action against errant institutions—nearly 3,000 teacher education colleges may be barred from admitting fresh students from the next academic year.

ð By January next year, NCTE will put out a ranking of the top 100 teacher training institutes.

ð While the move could create confusion, the government believes it is essential to curb the growth of poor quality institutions and bring transparency in teacher training.

ð NCTE functions under the Union human resource development (HRD) ministry. It has already collected preliminary data through affidavits and showcause notices it has served to around 12,000 institutions.

ð According to Sources, NCTE is hitting the reset on the grading system, with less emphasis on physical assets. Now, physical assets will get just 10% weightage, 20% weight will go to academic assets, 30% to teacher transactions and 40% to students’ learning outcome. Currently, there is no weightage on learning outcomes for approval or accreditation of such institutions.

ð Despite its commendable work in the academic fields, it could not perform essential regulatory functions, to ensure maintenance of standards in teacher education and preventing proliferation of substandard teacher education institutions. The National Policy on Education (NPE), 1986 and the Programme of Action thereunder, envisaged a National Council for Teacher Education with statutory status and necessary resources as a first step for overhauling the system of teacher education.