Based on soil characterization, rainfall, temperature and terrain, four main agro-climatic zones in Bihar have been identified. These are: 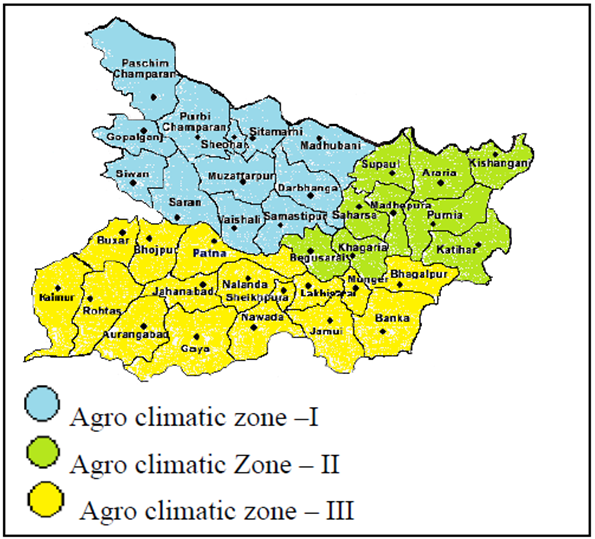 The lands of this zone which are alluvial plains are sloppy towards the south east direction with a very low gradient as evidenced by the direction in which the rivers flow. In this Zone West Champaran, East Champaran, Siwan, Saran, Sitamarhi, Sheohar, Muzaffarpur, Vaishali, Madhubani, Darbhanga, Samastipur, Gopalganj and Begusarai are covered. However, the rivers move eastward direction along the natural levee before they finally meet the Ganga. As a result, there are vast waterlogged areas in the districts of Saran, Vaishali and Samastipur. Due to near flatness of the landscape, vast area gets flooded during rains.

This zone has the following six broad soil association groups:

The soils are moderately rich to poor in nitrogen (especially in Gopalganj and Siwan districts), moderate to very low in available phosphorus and medium to high in available potash. The soils are showing symptoms of deficiency of zinc and iron mostly induced by high available calcium.

This zone, the alluvial plains of Kosi, Mahananda and its tributes and Ganga (a narrow strip in the south) is slightly undulating to rolling landscape mixed with long stretches of nearly flat landscape with pockets of areas having sub – normal relief. In this Zone Purnea, Katihar, Saharsa, Supaul, Madhepura, Khagaria, Araria and Kishanganj are covered.

Three broad soil association groups have been identified in this zone are:

The soils are very light to medium textured except for those in between the natural levees of Ganga and Kosi and Mahananda and away from the influence of running water of the rivers.

This zone can be categorised in two Sub zone:-

Agro-Climatic Zone III is zone is the alluvial plains of river Ganga on its southern side and the sediments are received both from river Ganga and those flowing from the south having their origins in the Chhotanagpur Plateau, which rise abruptly from the plains.  In the south of the natural levee of the Ganga, there is vast stretch of backwaters known as “Tal” lands extending from Buxar to Pirpaity, where most of the rivers and rivulets coming from the south get lost. The flood plains of Ganga, which get reworked and get eroded and deposited at regular intervals, are lighter than “Tal” lands  known locally as Diara lands.There are no marshy lands in this zone.

The main broad soil association groups recognized in this zone are :

The soils of this zone except that of ‘Diara’ area and ‘Tal’ lands are moderately well drained to somewhat poorly drained, moderately acidic to slightly alkaline and medium textured to heavy textured soils.

According to the old and existing data, a brief analysis is made on the status of Horticulture in the state which is furnished below:

The major fruit crops grown in Bihar are Mango, Guava, Litchi, Banana, etc. apart from these major crops minor crops like. Makhana, Pineapple, Betelvine are also grown. The area of fruit crops in Bihar during 2005-06 was 291.61 thousand hectares which was increased to 331.52 thousand hectares in 2014-15. Similarly the production was also increased from 3068.4 25 thousand metric tonnes in 2005-06 to 4120.88 thousand metric tonnes in 2014-15, the productivity of fruit crops has also increased significantly in 2008-09 (12.45) as compared to 2005-06 (11.2). Almost all the districts of North Bihar particularly Muzaffarpur, East Champaran and Samastipur have good potentiality in respect of litchi cultivation. Similarly Makhana, a pioneer fruit of Bihar is also grown intensively in the districts of Darbhanga, Madhubani, Saharsa, Katihar, Araria and Purnea.

The major commercial flowers like Marigold, Rose, Tuberose, Gladiolus and Jasmine are cultivated in Bihar.

The aromatic plants like Japanese Mint, Lemongrass, Pamaroja, J. citronella have been promoted by Horticulture Mission for commercial cultivation among farmers.