Fish farming is an important and fast growing sector in Bihar. The economy of Bihar is mainly dependent on agriculture, animal husbandry and fisheries. Fisheries and aquaculture sector play a key role in food security and employment generation as significant proportion of population depend upon fisheries, aquaculture and allied activities for their livelihood sustenance and income. Besides, the sector also generates precious revenue for the State. The importance of fisheries sector to the State economy has increased particularly after the creation of Jharkhand as a separate State. The State has two distinct land masses on either side of the holy River Ganga and is divided into 38 administrative districts, 21 in North Bihar and 17 in South Bihar. Bihar, lying in the heart of Gangetic plain, is blessed with fertile land resources though extreme hot and cold climatic conditions along with flood and drought situations are characteristic part of the geography.

The city is one of the best fishing grounds in India. The spawn of rehu, cattla and hilsa is collected from the river Ganges, which is demand in other part of Bihar and West Bengal. The fishing season begins in October, and the peak months are in December, January and February, when a variety if fish can be seen in the fish market. There are a large number of rivers & streams, ponds and low-lying fields in the district where water accumulates in the rainy season and these have considerable potential for development of fishery. The Fisheries Development Schemes of the district are managed by the district Fisheries office located in Patna under the administrative control of the Director of Fisheries, Government of Bihar 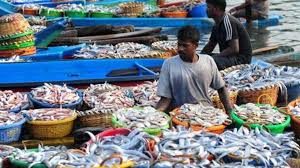 The northeast part of Bihar has a long stretch of flood plains in Gandak and Kosi basins. A series of shallow lakes locally known as chaurs exist in these areas to the tune of about 46000 ha. These water bodies support a rich biodiversity, but are biologically sensitive and fragile in nature. They are also the repositories of variety of freshwater food and ornamental fishes.

The state has immense natural aquatic resources in the forms of ponds and tanks where quality fish seed are required for good fish production.

Aquaculture and culture-based fisheries are the options for enhancing the productivity of more amenable waters such as ponds and the lakes with immediate results. In Bihar, fish culture is largely undertaken in waters given on lease basis and practised by fishers who were basically catching fish from rivers and lakes. In view of the fact that more and more agri-farmers are taking to aquaculture in the recent years, capacity building is critical for adoption of practices in a scientific manner.

In fishery farmer can work in three verticals based on their capacities. These primarily involve the routine functions to be performed everyday with utmost concentration and focus.

It implies developing the fish spawn in 72 hours. This is the first stage of the fish seed. After the egg is released from the female fish, then it is nurtured for 60 to 72 hours, later it hatches into spawn. The entire process of developing fish spawn is referred as seed production. The seed is sold at Rs. 1000-1500 per one lakh. It is the cheapest sale in the fish business.

Seed Rearing: The fish spawn (seed) is then reared to fish fry and later to fish fingerlings. These two development stages of the fish are done in seed rearing unit. Technically it can be further explained as rearing of 72 hours fish seed into 30 days old fish fry and again rear it for next one to two month till it grows as fish fingerlings.

Fish Cultivation: In this stage the fish fingerlings are raised for 5-9 months till they gain the weight between 1-2 kg for the table feed to be sold in the market. This stage is profitable provided the farmer has identified good source for procuring fish fingerlings as well as end sales of table fish.

Farmer can set up all two that is seed production and seed rearing simultaneously and together it is called as a complete hatchery project. Usually if the spawns are not sold then the farmer nurses the fish spawns into fish fry and subsequently to fish fingerlings then fish adults. It is gainful in every stage.

Value Addition: There are 32 types of fish by- products that can be developed from fish. Farmers would need to take special training for the same but it is also a good business endeavour. It gives immense room for innovation as everyone likes novel and tasty food items. Ornamental culture units and installing ornamental fish showrooms are the few ancillary activities that a farmer can also look for diversification and expansion. There are many more similar activities.

Feed
The fish feed can either be prepared in-house or bought from the market. However the result certainly varies. The protein rich fish feed manufactured and supplied by the companies’ gives very good performance. Weight gain in fish is quite effective with these feed but surely it is expensive. If the farmer can invest in these feed then he must consider because it is gainful for sure. I have recorded 3-5 gm growth in fish in one day with these feed. It is not an exaggeration instead a proved record that one Bihar based farmer got two harvest in the period of one harvest using concentrate fish feed.

Problems
Farmers always miss on the institutional credits and fishery is highly capital intensive business. It is extremely promising but it lacks the required support. Money is needed on the day one to get into fishery but unfortunately it is tremendously difficult to get the bank loan for aquaculture. If the fish farm is canal fed then farmer struggles with water and electricity tribulation too. Yet fish farming is recommended because problems and challenges are part and parcel of every business undertaking.

Bihar is bestowed with vast and varied inland aquatic resources. The paradox of fisheries development in Bihar is that while it has large, untapped and underutilized water resources for aquaculture. Despite being the fourth highest inland producing state in the country, it has to depend on Andhra Pradesh for the supply of about 1.5 lakh tonnes of fish. The annual domestic demand of fish within the state is nearly 5.82 lakh tonnes, against the present annual production of around 4.32 lakh tones only. The annual per capita fish availability of the state is 7.56 kg per head while the national average is 9 kg per head. The average fish production from the available water resources of the state is 2600 kg / ha. per year against the national average of 2900 kg/ ha./year. The underutilization of aquaculture resources, unscientific management of water bodies and lack of entrepreneurship are some of the most obvious reasons for the substantial gap between demand and supply.

The major challenge therefore, is to develop aquatic resources for maximum sustainable fish yield to bridge the gap of demand and supply and to enhance the nutritive and livelihood security of fish farmers. Bihar is a land-locked state with an agrarian economy. It is endowed with vast and varied fisheries and aquaculture resources viz rivers, canal, reservoirs, ox-bow-lakes, flood plains (chaurs) and ponds. Fisheries are an age-old traditional occupation deeply associated with the economical and rural socio-cultural system of the state. Fish surplus state where fisheries contribute in rural livelihood, food security and integrated economy development.

Development and management of fisheries and aquaculture resources for three fold increase in fish production. Creating additional livelihoods to fishers and farming households, ensuring nutritional security and economic growth of the state with due considerations to environmental well-beings and gender concerns.