Corrosion is defined as an attack on a material as a result of chemical, frequently electrochemical reaction, with the surrounding medium. According to this definition, the term corrosion can be applied to all materials, including non-metals. But in practice, the word corrosion is mainly used in conjunction with metallic materials.

Why do metals corrode? Apart from gold, platinum and a few others, metals do not occur in the nature in their pure form. They are normally chemically bound to other substances in ores, such as sulphides, oxides, etc. Energy must be expended (e.g. in a blast furnace) to extract the metals from the sulphides, oxides, etc to obtain pure metals.

Pure metals contain more bound energy, representing a higher energy state than that found in the nature as sulphides or oxides.

Chemical corrosion can be seen as oxidation and occurs by the action of dry gases, often at high temperatures. Electrochemical corrosion on the other hand takes place by electrode reactions, often in humid environments, i.e. wet corrosion.

These layers of oxide may be more or less durable in water, for instance. We know that plain carbon steel corrodes faster in water than stainless steel. The difference depends on the composition and the penetrability of their respectively oxide layers. The following description of the corrosion phenomenon will only deal with electrochemical corrosion, i.e. wet corrosion.

How do metals corrode in liquids? Let us illustrate this, using a corrosion phenomenon called bimetal corrosion or galvanic corrosion. The bimetal corrosion cell can e.g. consist of a steel plate and a copper plate in electrical contact with one another and immersed in an aqueous solution (electrolyte).

In the corrosion cell described above, the copper metal is called the cathode. Both metal plates are referred to as electrodes and the definition of the anode and the cathode are given below.

When positive iron atoms go into solution from the steel plate, electrons remain in the metal and are transported in the opposite direction, towards the positive current.

The prerequisites for the formation of a bimetal cell are:
1. Electrolyte
2. Anode
3. Cathode
4. Oxidation medium, such as dissolved oxygen (O2) or hydrogen ions (H+).

The electrode potential of a metal is an indication of the tendency of the metal to dissolve and corrode in a certain electrolyte.

Reference is also made to the “nobility” of the metal. The more noble the metal, the higher the potential is, the less the tendency it has to dissolve in an electrolyte.

The electrode potentials of different metals can be specified in relation to one another in galvanic series for different electrolytes.

The steel-copper example has shown how corrosion takes place when two different materials are connected in an aqueous solution. How does corrosion take place on the surface of a single metal? When the surface of a metal is studied under a microscope, it will be seen that it is not a single homogeneous metal. Differences in structure and grain size occur on the surface. The chemical composition may vary and various impurities may be present. 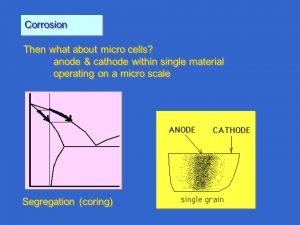 If the electrode potential is measured across an apparently homogeneous surface, it will be found to vary considerably within areas of only fractions of a square millimetre. So cathodes and anodes, possibly small but sufficiently large to cause corrosion, can be formed on the same metal surface.