Iron is an important constituent of hemoglobin, which is in blood. Iron is the metal used most widely in industries and hence may be called the king of metals. It is the second most abundant metal after aluminum. Iron does not occur in native state, since it is oxidized easily. 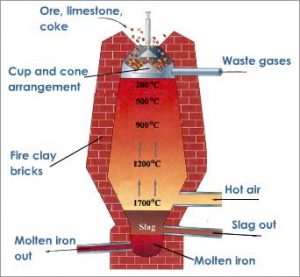 It is usually extracted from haematite and limonite.

Extraction of iron from its ore is the third and the penultimate process in the Metallurgy. The extraction of metals and its isolation occurs over few major steps:

Extraction of metal from the concentrated Ore

Purification of the metal

How is iron extracted from its ore? It’s a long process which begins with Concentration through calcination roasting. Concentration removes the water and other volatile impurities such as sulphur and carbonates. This concentrated ore is mixed with limestone (CaCO3) and Coke and fed into the blast furnace from the top. It is in the blast furnace that extraction of iron occurs.

What happens in the Blast Furnace?

The purpose of a Blast Furnace is to reduce the concentrated ore chemically to its liquid metal state. A Blast furnace is a gigantic, steel stack lined with refractory brick where the concentrated iron ore, coke and limestone are dumped from the top, and a blast of hot air is blown into the bottom. All the three ingredients are crushed into small round pieces and mixed and put on a hopper which controls the input.

Hot air is blown from the bottom and coke it burned to yield temperatures up to about 2200K. Burning coke provides the majority of the heat required for this process. At such high temperatures, Coke reacts with the oxygen in the hot air to form Carbon Monoxide (CO). The CO and heat now move upwards and meet the raw material running down from the top. The temperature in the upper parts of the Blast Furnace is considerably lower than the 2200K at the bottom. In this part, Haematite (Fe2O3) and Magnetite (Fe3O4) are reduced to Ferrous Oxide (FeO).

Reactions in the Blast Furnace

Process of Extraction of Iron: Inside the Blast Furnace

The limestone also decomposes to CaO which removes the silicate impurity of the ore in the form of Slag. It can be easily separated out of molten iron. The iron manufactured in Blast Furnaces contain about 3 – 4 % of Carbon and smaller quantities of many other impurities such as sulphur, Silicon, etc. This is called Pig Iron. It is a hard but brittle metal and the impurities severely hamper its strength. Carbon seems to play a significant role in influencing the brittleness and hardness balance in iron. To further reduce the carbon content of pig iron, it is melted again with scraps of iron and coke and subjected to the blast of hot air. This kind of iron is called Cast Iron and has a slightly lower carbon content 2 – 3 %. This is even harder than pig iron.

Wrought Iron is the purest form of iron available commercially available and is prepared from cast iron by heating cast iron in a furnace lined with Haematite (Fe2O3). The Haematite reacts with Carbon in the cast iron to give pure iron and carbon monoxide gas which escapes.

Limestone is then added as flux, and it creates the slag. Impurities such as S, Si pass into the slag and the slag later can be easily separated to yield pure iron.