For example, a reaction which shows color change: the rate of such reaction can be measured by observing how the intensity of color formed changes with time. In a similar way, a reaction which involves gases can have its rate measured by collecting the gas and observing the way its volume or mass increases with time. Note: increase in rate of reaction corresponds to decrease in time taken for the reaction, and vice versa.

I.e., rate of reaction is inversely proportional to time,

Factors which affect the Rate of Chemical Reactions

Factors which can affect the rate of a chemical reaction include:

By the kinetic theory, chemical reactions occur due to collisions of molecules, atoms or ions involved in the reaction. When the temperature of a reacting system is increased by way of heating, the reacting particles gain energy and are able to move faster, resulting in increased collisions, which increases the rate of the reaction.

An illustration of this can be found in the reaction between sodium trioxo sulphur sulphate(VI) solution and hydrochloric acid. The reaction leads to the precipitation of sulphur.

By observing the precipitation of sulphur at various temperatures with time, the result obtainable would indicate that: as the temperature of the reaction is increased, the time taken to precipitate sulphur is decreased (i.e. rate of reaction increases).

Note: the way by which the intensity of the precipitate can be measured is to carry out the entire reaction in a beaker, and by placing the beaker and its contents on a white piece of paper with a cross marked on it. The time for the disappearance of the cross when the contents of the beaker are viewed from above will give a measure of the time taken for a certain fraction of the reaction to occur (i.e. the rate of the reaction) – a stop clock or a watch is used to note this time.

By plotting the graph of temperature over time of reaction, we obtain the curve: 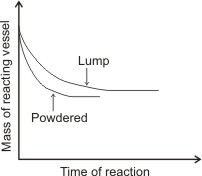 Note: the curve slopes from left to right indicating that increase in temperature leads to decrease in time (i.e., increase in rate of reaction) and vice versa. Thus, temperature is inversely proportional to time (Temp α 1/Time).

In general, increase in temperature of a reaction by 100 results in doubly the rate of reaction (i.e. decrease in time taken by half).

To investigate the effect of concentration on the rate of reaction, the reaction between dilute HCl and sodium trioxo sulphur sulphate (VI) solution to precipitate sulphur may be studied.

By plotting the graph of concentration against time of reaction, the following curve is obtained: 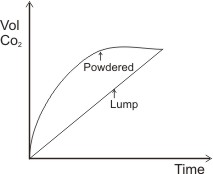 Another study to show the effect of concentration of reactants on the rate of reaction is “the iodine-clock reaction” – this is the reaction between hydrogen peroxide solution and acidified potassium iodide solution. Iodine is produced and is indicated by the observation of a dark-blue coloration with starch.

Note: generally, increase in the concentration (in moles per dm3 or mmHg for gases) of reactants will result in increase in rate of reaction – i.e. decrease in reaction time – and vice versa. The graph above applies to all similar cases.

(i) Dilute HCl and marble chips.

(ii) Dilute HCl and powdered marble of the same mass as

(l) Both reactions produce CO2 gas. This causes a reduction in the mass of the reacting vessel with time, and this may be taken as a measure of the rate of the reaction.

The reason for this is that the surface area of the powdered marble, being very large compared with that of the chip is responsible for the difference in their reaction rates.

The graph of the mass of reacting vessel against time of reaction is similar to the diagram below:

Note: The two curves level off at the same point. The reason for this is that the chip (or large piece) completely dissolves after some time, then the rate of its reaction becomes equal to that of the powdered one.

The presence of catalysts in chemical reactions would increase their rate.