Polyethylene is a thermoplastic polymer with variable crystalline structure and an extremely large range of applications depending on the particular type. It is one of the most widely produced plastics in the world (tens of millions of tons are produced worldwide each year). The commercial process (the Ziegler-Natta catalysts) that made PE such a success was developed in the 1950s by German and Italian scientists Karl Ziegler and Giulio Natta. 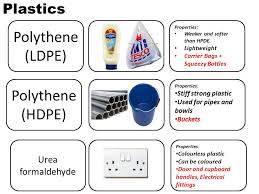 There are a vast array of applications for polyethylene in which certain types are more or less well suited. Generally speaking, High Density Polyethylene (HDPE) is much more crystalline, has a much higher density, and is often used in completely different circumstances than Low Density Polyethylene (LDPE). For example, LDPE is widely used in plastic packaging such as for grocery bags or plastic wrap. HDPE by contrast has common applications in construction (for example in its use as a drain pipe). Ultrahigh Molecular Weight Polyethylene (UHMW) has high performance applications in things such as medical devices and bulletproof vests.

What Are The Different Types of Polyethylene?

What are the Characteristics of Polyethylene?

Now that we know what it is used for, let’s examine some of the key properties of Polyethylene. PE is classified as a “thermoplastic” (as opposed to “thermoset”), and the name has to do with the way the plastic responds to heat. Thermoplastic materials become liquid at their melting point (110-130 degrees Celsius in the case of LDPE and HDPE respectively). A major useful attribute about thermoplastics is that they can be heated to their melting point, cooled, and reheated again without significant degradation. Instead of burning, thermoplastics like Polyethylene liquefy, which allows them to be easily [injection molded] and then subsequently recycled. By contrast, thermoset plastics can only be heated once (typically during the injection molding process). The first heating causes thermoset materials to set (similar to a 2-part epoxy) resulting in a chemical change that cannot be reversed. If you tried to heat a thermoset plastic to a high temperature a second time it would simply burn. This characteristic makes thermoset materials poor candidates for recycling.

Different types of Polyethylene exhibit wide variability in their crystalline structures. The less crystalline (the more amorphous) a plastic is, the more it demonstrates a tendency to gradually soften (i.e. they have a wider range between their glass transition temperature and their melting point). Crystalline plastics, by contrast, exhibit a rather sharp transition from solid to liquid.

Polyethylene is a homopolymer in that it is composed of a single monomer constituent (in this case ethylene: CH2=CH2).

Why is Polyethylene used so often?

Polyethylene is an incredibly useful commodity plastic. Because of the diversity of PE variants it is incorporated into a wide range of applications. Unless it is required for a specific application, we don’t typically use Polyethylene as part of the design process at Creative Mechanisms. For some projects, a part that will eventually be mass produced in PE can be prototyped with other more prototype-friendly materials like ABS.

PE is not available as a 3D printable material. It can be CNC machined or vacuum formed.

How is PE made?

Polyethylene, like other plastics, starts with the distillation of hydrocarbon fuels (ethane in this case) into lighter groups called “fractions” some of which are combined with other catalysts to produce plastics (typically via polymerization or polycondensation). You can read about the process in more depth here.

PE for Prototype Development on CNC Machines and 3D Printers:

PE is available in sheet stock, rods, and even specialty shapes in a multitude of variants (LDPE, HDPE etc.), making it a good candidate for subtractive machining processes on a mill or lathe. Colors are usually limited to white and black.

PE is not currently available for FDM or any other 3D printing process (at least not from the two major suppliers: Stratasys and 3D Systems). PE is similar to PP in that it can be difficult to prototype with. You are pretty much stuck with CNC machining or Vacuum forming if you need to use it in your prototype development process.

In solid form, no. In fact, Polyethylene is often used in food handling. It could be toxic if inhaled and/or absorbed into the skin or eyes as a vapor or liquid (i.e. during manufacturing processes). Be careful and closely follow handling instructions for molten polymer in particular.

What are the Disadvantages of Polyethylene?

Polyethylene  is generally more expensive than polypropylene (which can be used in similar part applications). PE is the second best choice for living hinges, behind PP at number one.

Listed below are the top 5 most common uses for Polyethylene. These are the products containing Polyethylene which you are most likely to find already in your home and at the local supermarket.

At some point in our lives, everyone has used sandwich bags for one reason or another. What you may not know is that Polyethylene is used in the manufacturing process of these bags.

The polyethylene is used to make the plastic film that will eventually become the sandwich bags.

Almost every cling wrap you purchase at the supermarket is made from Polyethylene. The Polyethylene combined with other materials helps to make the cling wrap work and keep its hold.

While the cling wrap itself is actually very thin, low density Polyethylene is not used in its production.

Instead, during the manufacturing process the Polyethylene is stretched multiple times to give the cling wrap its normal, thin appearance.

The moisture barriers they use on construction sites and those that are used in crawl spaces under houses are made from Polyethylene.

Low density Polyethylene is not used in the manufacturing of these items, due to the fact that they need the highest quality of Polyethylene available to make sure that the areas are secured from any moisture getting inside.

You can also see non-moisture barriers made from Polyethylene on construction sites, and those are used to keep people out of certain areas or to help protect areas from damaging winds, dirt, or any other material that the workers want to keep off of the site.

No doubt you have been in the supermarket and found yourself searching for the best pack of ground beef or chicken.

You may notice that there is plastic wrapped around the meat to help keep it fresh before it can be sold and used.

That plastic wrapping is Polyethylene in a low density form. It is used to help make sure that the meat you are purchasing stays fresh until you can get it home and either freeze it or cook it.

The plastic wrapper is tightly fitted onto the packaging so that no other food particles or bacteria can contaminate the meats you are buying.

It can also be used in bakery wrapping to keep bread and other perishable sweet treats from spoiling before they can be sold and used.

You may notice that the bakery bags are a little different from the plastic wraps over your chicken, and that is due to the quality of Polyethylene that is used to make them. However, they both perform the same duty and keep your food fresh and contaminate free.

Polyethylene is also used to make the coatings that you see on fruit juice boxes. Though the container is mostly made of out cardboard type material with a small amount of plastic mixed in, the outer coating that keeps the box from falling apart once the liquid has been introduced is the Polyethylene.

It may look like a shiny coating for the box, but it is actually keeping that box tightly together so that kids can enjoy their juice boxes.

Most of the time you will see the juice boxes being wrapped when you purchase them from a larger grocery chain.

Polyethylene is made into millions of products every year, most of which we as consumers use on an everyday basis.

And if you are like most people, you did not realize the number of items that can be made from Polyethylene, but it is actually the number one used plastic in the world.

You would be surprised if you looked around at the world today and actually noticed everything that is made from Polyethylene.

Companies are even using it to make cable insulators to keep moisture and animals off of the actual cable wires.

Right now, low density Polyethylene is gaining a lot of ground and is being used in more and more places around the world.

Though it is mainly used in the manufacturing of coatings and cable insulators, it is also being considered for another large industry.

Manufacturers of plastic toys have been looking into using low density Polyethylene to create their toys.