Sardar Vallabhbhai Patel handled effectively the integration of the princely states with his diplomatic skills and foresightedness. The problem of amalgamating 562 independent states with a democratic self-governing India was difficult and delicate. But it was essential to save India from balkanization, once the Paramountcy of British crown would lapse. Sardar Patel took charge of the states department in July 1947. He sensed the urgent and imperative need of the integration of princely states. He followed an iron handed policy. He made it clear that he did not recognize the right of any state to remain independent and in isolation, within India.

Sardar vallabhbhai Patel always raised his voice on several issues against exploitation and criticized the high-handedness of authority, the exploitative revenue policy of the Government and maladministration in the Princely states. He not only criticized the arbitrary policies of confiscation of movable and immovable properties, but also insisted on guarded regulations on land reforms and nationalization of key industries. His efforts to reform the Hindu religion and protect the people of other faiths reflected his longing for the right to religion. He encouraged the duly elected authority to bring restrictions through various legislative measures to freedom for all. Thus, his political value system was a fine synthesis of liberalism, conservatism and welfarism. 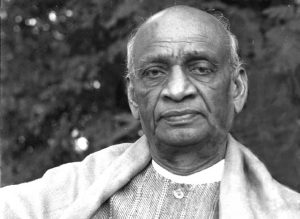 His vision of State was in tune with the pattern of his political values. In his concept, the State was founded and held together by a high sense of nationalism and patriotism. Individual liberty was to be in conformity with the provisions of the Constitution, to create a Nation-State, he pressed for the emancipation of backward communities and women and bring about Hindu- Muslim unity through the Gandhian constructive programme and skillfully utilised the higher castes for social integration and political mobilisation. Thus, he strengthened the plural basis of the nation-state by bringing electoral participation as effective political mobilisation. He saw a nation as ‘democratic in structure, nationalistic in foundation and welfarist in spirit and function’.

The process of the integration of the various states and the part played by Sardar in it, we realize the important role that Sardar had in the integration of the country. The states included Saurastra (including Junagadh) Hyderabad, Travancore, Cochin, Kashmir and other small states. Sardar’s role in each of these states was vital. The continuation of a divided and weak central government would in Patel’s mind, result in the wider fragmentation of India by encouraging more than 600 princely states towards independence. Between the months of December 1946 and January 1947, Patel worked with civil servant V.P. Menon on the latter’s suggestion for a separate dominion of Pakistan created out of Muslim-majority provinces. Communal violence in Bengal and Punjab in January and March 1947 further convinced Patel of the soundness of partition. Patel, a fierce critic of Jinnah’s demand that the Hindu-majority areas of Punjab and Bengal be included in a Muslim state, obtained the partition of those provinces, thus blocking any possibility of their inclusion in Pakistan. By August 15, 1947 all except Hyderabad, Junagarh and Kashmir acceded to India. He thereafter carried three fold processes of assimilation, centralization and unification of states. The states were amalgamated to form a union and that union was merged with the Union of India. He handled the Junagarh and Hyderabad crisis as a seasoned statesman. Nawab of Junagarh wanted to accede to Pakistan.The integration of the princely states thus acted as a synchronizing phenomenon and established a State of balance between chaos and segmentation and solidarity of the newly born Indian Union.

Scholars differ about Kabir’s parentage, his family, the place of his birth, the time and place of his death etc. Instead of concentrating on various beliefs about Kabir’s life, the scholar deems it appropriate to side with the beliefs that are widely accepted. Scholars agree with the fact that Kabir belonged to the time of Sikandar Lodi and was a disciple of Swami Ramanand. Apropos this fact, most scholars believe that Kabir was born in 1455 and died in 1575.

At a very early stage, Kabir seems to have realised the fact that any kind of tenets, dogmas, precepts, principles and cult are counterproductive as far as true devotion is concerned as all these things breed dogmatism and fanaticism, which ultimately do not allow humankind to see the truth as it is. That is why, probably, many of his poems appear to urge to discard creeds and beliefs that embrace without any rational thinking.

Besides, Kabir appears to talk of the God that does not live at a holy shrine or a temple but within man. However, Kabir seems to say that ironically that is why people cannot notice God and oblivious of their real self they keep thronging at Kashi and Kaba:

In the midst of water,

A fish thirsts for water,

The thing lies at home,

But searching for it,

In the woods, they roam.

The world is false,

Be it Mathura or Kashi.

Here, Kabir seems to believe that as a fish lives in water and is surrounded by water, human beings live in God and are surrounded by God but they are still away from God because in vain they seek Him outside.

Kabir’s devotion looks to be not a blind devotion born of an impulse. Rather it seems to be an application of his belief in logic and evidence. The researcher holds that Kabir scoffs at the prevalent ritual of chanting God’s name on beads, despite the fact that in Hindu and Muslim religions chanting God’s name is believed to liberate one from suffering of this life.

This kind of egalitarianism, seems to be a need of the time when Kabir lived, as society was presumably divided into various strata of hierarchy and those belonging to the lower strata were believed to bear the brunt of inhumane discrimination, ostracism and untouchability. Thus, Kabir might have opposed differentiation made on the basis of castes not because he is a social reformer but because he is a rationalist in his thinking and a humanist at heart.

Kabir seems to believe that a person has to be careful of what he speaks and ensure that his words do not hurt anybody. It is observed that though means of communication have increased, communication between two people has decreased because people unnecessarily indulge in grumbling about and criticising others. Consequently nobody is ready to listen. If a person speaks words imbued with love, other people will love to hear him. On the other hand, if he keeps bitching about others, he will alienate a lot of people and lose his friends. As a result, a person will be left alone and the loneliness will tear him asunder. Thus, being polite in our speech is very much essential for social solidarity.