The Smart City Mission is an urban renewal programme initiated by the central government in June 2015. Three cities in Bihar were recognized for this initiative — Muzaffarpur, Bhagalpur and Biharsharif. The smart city proposal is to be implemented at a cost of Rs. 1309.30 crore, with Rs. 1000 crore shared equally between the state government and central government. 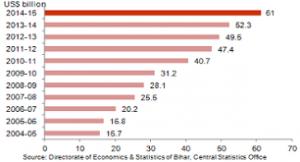 The main objective of the programme is to develop the towns along the river Ganga. This programme of the central government targets town located along the river Ganga, for cleaning and rejuvenation of the river. There are 32 towns identified in Bihar for implementation of the scheme. The Detailed Project Reports (DPR) are being prepared in these towns for Interception and Diversion Sewers, Solid Waste Management, River Front Development, Crematoria, Dhobi Ghats and Community Toilets.

The objective of this programme is to improve the living conditions of the slum dwellers, through construction of new houses as well as rehabilitation of existing dilapidated houses. The central government has sanctioned 30 schemes in 26 towns of Bihar. This scheme is also planned to end in March, 2017.

Launched in 2011, the objective of this programme is to create towns which are free of slums. All the district headquarters are included under this programme and the state government has already prepared 29 Detailed Project Reports (DPR) for 27 towns.

However, till date, the Central Sanctioning and Monitoring Committee has approved 7 of these proposals which are located in Patna, Darbhanga, Katihar and Purnea. In 2015, this scheme has been included under the new programme ‘Housing for All’.

Smart Cities Mission focus on the  most pressing needs and  the greatest opportunities to improve lives of the people. They tap a range of approaches – digital and information technologies, urban planning best practices, public-private partnerships, and policy change – to make a difference. They always put people first.

The objective is to promote cities that provide core infrastructure and give a decent quality of life to its citizens, a clean and sustainable environment and application of ‘Smart’ Solutions. The focus is on sustainable and inclusive development and the idea is to look at compact areas, create a replicable model which will act like a light house to other aspiring cities. The Smart Cities Mission is meant to set examples that can be replicated both within and outside the Smart City, catalyzing the creation of similar Smart Cities in various regions and parts of the country.

The Smart City Mission is an urban renewal programme initiated by the central government in June 2015. The main aim of the program is to improve infrastructure and to create sustainable and citizen friendly urban cities. A smart city is defined as a city which is highly developed in terms of infrastructure and communications. At its launch in 2015, the central government had identified 100 towns across India to be under this programme.

Three cities in Bihar were recognized for this initiative — Muzaffarpur, Bhagalpur and Biharsharif. In the first round of selection the central government selected 20 cities, but none in the state of Bihar.

In the second round, Bagalpur has been selected as one of the cities under this programme. There are two interventions proposed — area based development in a pocket of the city covering 613 acres and a pan city initiative. The area based development includes several pilot interventions that can then be scaled up later. The pan city intervention proposes an intelligent transport system and intelligent solid waste management. The smart city proposal is to be implemented at a cost shared equally between the state government and central government  through convergence with various schemes, and the remaining  through PPP funding.

It is an urban transformation scheme with the focus of the urban renewal projects to establish infrastructure that could ensure adequate robust sewerage networks and water supply.

The Bihar government is preparing a master plan for rural development to change the face of villages with community participation. It is a special initiative by the rural development department for inclusive development of rural areas including villages across the state.

The socio-economic mapping of each ward of the panchayat is underway to understand the need of the locality for development. A two-day workshop on the theme of intensive participative planning exercise for preparing the master plan for rural development has been organized. Hundreds of block development officers and others attended it. A pilot project of a master plan has already been prepared for Gonaha block in West Champaran district.