The Barabar Caves are perhaps the oldest surviving rock-cut caves in India, mostly dating from the Maurya Empire (322–185 BCE), some with Ashokan inscriptions, located in the Makhdumpur region of 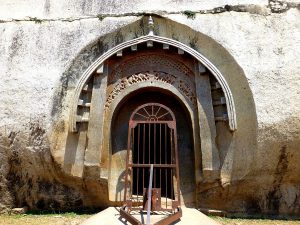 These caves are situated in the twin hills of Barabar (four caves) and Nagarjuni (three caves); caves of the 1.6 km (0.99 mi)-distant Nagarjuni Hill are sometimes singled out as the Nagarjuni Caves. These rock-cut chambers date back to the 3rd century BCE, Maurya period, of Ashoka (reigned 273–232 BCE) and his grandson, Dasharatha Maurya.

Chirand is a archaeological site in the Saran district of Bihar, India, situated on the northern bank of the Ganga River.It has a large pre-historic mound which is known for its continuous archaeological record from the Neolithic age (about 2500–1345 BC) to the reign of the Pal dynasty who ruled during the pre-medieval period. The excavations in Chirand have revealed stratified Neolithic, Chalcolithic, and Iron Age settlements, and transitions in human habitation patterns dating from 2500 BC to 30 AD.

Jalalgarh Fort is an almost 300 years old ruined fort located at 20 km north of Purnia, Bihar, India. The fort was built by Saif Khan Barha, the nawab of Purnia in 1722.

The fort is a large quadrangular structure and has high walls which helped to protect the wall from Nepalese invasion.Experts claims, this fort is an embodiment of the beauty of both Hindu and Islamic architecture.

Nalanda was an acclaimed Mahavihara, a large Buddhist monastery in the ancient kingdom of Magadha (modern-day Bihar) in India. The site is located about 95 kilometres southeast of Patna near the town of Bihar Sharif, and was a centre of learning from the fifth century CE to c. 1200 CE. It is a UNESCO World Heritage Site. The highly formalized methods of Vedic learning helped inspire the establishment of large teaching institutions such as Taxila, Nalanda, and Vikramashila which are often characterised as India’s early universities.Nalanda flourished under the patronage of the Gupta Empire in the 5th and 6th centuries and later under Harsha, the emperor of Kannauj.The liberal cultural traditions inherited from the Gupta age resulted in a period of growth and prosperity until the ninth century. The subsequent centuries were a time of gradual decline, a period during which the tantric developments of Buddhism became most pronounced in eastern India under the Pala Empire.

Kesariya is a town in Bihar, India in the district of East Champaran, near Rampur Khajuria (NH28). It is the site of a stupa built by the Mauryan king Ashoka.

Ancient Kesariya was called Kesaputta and was a republic ruled by Kalamas, which was later annexed by its monarchical neighbour Kosala. Alara Kalama, the teacher of Buddha before enlightenment, is said to belong to Kesaputta. Buddha is also said to have had direct connection with Kesaputta. According to Jataka stories Buddha ruled this place as a Chakravartin Raja in his previous birth. Similarly, it was during one of his visits to Kesaputta that Buddha gave one of his most important discourses, the celebrated Kessaputtiya Sutta, popularly known as Kalama Sutta. Kesariya stupa is believed to have been built to honor the place where Buddha had spent the last days of his journey, before attaining Nirvana. It is said that on his last journey to Pawa, Buddha handed over his begging bowl to the following Lichhivis, people of Vaishali and requested them to go back to Vaishali. To venerate the end life of Buddha, the Lichhivis are said to have built this stupa. While formerly, it was only a mud stupa, it gained its present structure in the Maurya, Sunga and Kushana period. Huien Tsang mentions having seen the grand Stupa in Kia-shi-po-lo (Kesariya) but it was deserted and vegetation had overgrown.

The Lomas Rishi Cave, also called the Grotto of Lomas Rishi, is one of the man-made Barabar Caves in the Barabar and Nagarjuni hills of Jehanabad district in the Indian state of Bihar. This rock-cut cave was carved out as a sanctuary. It was built during the Ashokan period of the Maurya Empire in the 3rd century BC, as part of the sacred architecture of the Ajivikas, a non-Buddhist religious and philosophical group of the period.  The hut-style facade at the entrance to the cave is the earliest survival of the ogee shaped “chaitya arch” or chandrashala that was to be an important feature of Indian rock-cut architecture and sculptural decoration for centuries. The form was clearly a reproduction in stone of buildings in wood and other vegetable materials, and there is no particular reason to believe that the example here was the specific influence on later examples, of which there are many at later Buddhist sites such as the Ajanta Caves and Karla Caves in Maharashtra.

Saptparni Cave, also referred to as Saptaparni Cave or Sattapani Cave, is a Buddhist cave site about 2 kilometres  southwest from Rajgir, Bihar, India. It is embedded in a hill. The Saptaparni Cave is important in the Buddhist tradition, because many believe it to be the site in which Buddha spent some time before his death, and where the first Buddhist council was held after Buddha died (paranirvana). It is here that a council of few hundred monks decided to appoint Ananda (Buddha’s cousin) and Upali, believed to have a good memory and who had accompanied the Buddha when he gave sermons in north India, to compose Buddha’s teachings for the future generations. The Buddha never wrote down his teachings. After the Saptaparni Caves meeting, Ananda created an oral tradition of Buddha’s teaching from his memory, prefacing it with “Thus have I heard on one occassion”. Upali is credited with reciting the Nikaya discipline or “rules for the Bhikshus”.

Vikramashila was one of the two most important centres of learning in India during the Pala Empire, along with Nalanda. Vikramashila was established by King Dharmapala (783 to 820) in response to a supposed decline in the quality of scholarship at Nalanda. Atisha, the renowned pandita, is sometimes listed as a notable abbot. It was destroyed by the forces of Muhammad bin Bakhtiyar Khilji around 1200.  Vikramashila (village Antichak, district Bhagalpur, Bihar) is located at about 50 km east of Bhagalpur and about 13 km north-east of Kahalgaon, a town in Bhagalpur district . It is approachable through 11 km long motorable road diverting from NH-80 at Anadipur about 2 km from Kahalgaon.