There are evidences of Mesolithic human Inhabitation in Bihar. Pre-historic rock paintings have been discovered from the Kaimur, Nawada and Jamui region of Bihar. These paintings depict the lifestyle of people during that time. The pictures depict human activities like dancing, hunting walking etc. These paintings are identical to those found in central and southern India and also in Europe and Africa. The rock paintings of Spain’s Alta Mira and France’s Lascaux share some common features with those discovered from Bihar. Evidences of Neolithic settlement were discovered over the bank of the Ganges at Chirand region of Bihar. 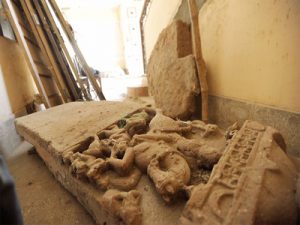 Traces of Mesolithic habitation are found in Paisra ( munger) . Indian Mesolithic period began with the Holocene, however, in many regions there are no such early sites discovered as yet. In many places it developed concurrently to the Neolithic/Chalcolithic. In more isolated regions hunter-gatherer populations persisted until the Historic times. Stone tool manufacturing was ceased with the popularization of iron.

Chirand is a archaeological site in the Saran district of Bihar, India, situated on the northern bank of the Ganga River. It has a large pre-historic mound which is known for its continuous archaeological record from the Neolithic age (about 2500–1345 BC) to the reign of the Pal dynasty who ruled during the pre-medieval period. The excavations in Chirand have revealed stratified Neolithic, Chalcolithic, and Iron Age settlements, and transitions in human habitation patterns dating from 2500 BC to 30 AD.

Chirand Neolithic group occupied the plains, while their contemporaries inhabited the plateaus and hills. The occupational categorization in Chirand covers three periods – Period I Neolithic (2500–1345 BC), Period II Chalcolithic (1600 B.C) and Period III Iron age.Carbon dating of the top layer of the Neolithiic period dates the layer between 1910 BC and 1600 BC. The lowest level of the finds date to 200 BC.

Neolithic people experienced an economy that included hunting, gathering, fishing and animal rearing.Paddy husk impressions in some potsherds indicate Neolithic involvement in cultivating rice and cereals such as wheat, moong, masoor, and barley. Both cultivated and wild rice was harvested during summer and again during winter.

The archaeological finds in Chirand are from a Neolithic deposit of 3.5 metres (11 ft) thickness, a Chalcolithic layer 5.5 metres (18 ft) thick and iron age formation of 2.45 metres (8 ft 0 in) thickness. Copper was used during the Chalcolithic period, while iron was found in the upper strata. A cache of 88 Kushan period coins were unearthed at the site.

25,000 potsherds excavated from Chirand are grouped according to the Period II Neolithic pottery appearing more refined than the Period I pottery, all from smoothed clay mixed with mica. Most of the pottery was hand made. Some vessels were made by turn table or dabbing. Half of the potsherds are red ware and half are black and red ware from different shapes and sizes of vases, bowls, and knobbed pottery.

Hearths and oblong shaped ovens were found in a semicircular hut. The white colour of the soil around the hearth and the ovens found at the site pointed to animal meat roasted in the ovens, likely for community feeding. Rice was a staple food. Mud boundary walls of houses were traced. Burnt chunks of clay with reed or bamboo impressions suggest that houses were destroyed by fire. Houses were larger in size in the Chalcolithic period compared to the Neolithic period, made of reeds and bamboo with mud plaster and flooring of fired earth. A circular hearth and a few post-holes were also found.

The Neolithic stone implements of celts were found. Axes found were made of quartzite, basalt and granite. The finds included nine types of microliths. Waste flakes found in the area indicate prevalence of the process of manufacture in a well established microlithic industry in the area that included chert, chalcedony, agate and jasper, derived from the dry river bed of the Son river. The final products in the collection are stone discs in long, cylindrical and triangular shapes.