Since the 19th century the princely states and the feudatory states of Orissa and Chota Nagpur were not part of Bengal, but British relations with them were managed by its government through the Bengal Presidency.

The Eastern States Agency was created on 1 April 1933. This agency dealt with forty-two princely states in eastern India, located in the present-day Indian states of Chhattisgarh, Jharkhand, Odisha, West Bengal and Tripura. Before the creation of the Eastern States Agency in 1933, twenty-three native states of the former Orissa Tributary States and Chota Nagpur States were under the suzerainty of the British provinces of Bihar and Orissa and sixteen were under that of the Central Provinces.

The Agent reported to the Governor General of India and two Political Agents under his supervision were posted at Sambhalpur and Raipur.

Cooch Behar and Tripura were transferred from Bengal Province to the Eastern States Agency on 1 November 1936.

On 1 December 1944, the status of this agency was raised to that of a first class residency. These states were grouped into three political agencies, under the “Resident” in Calcutta. The headquarters of the Orissa States Agency was at Sambhalpur, the headquarters of the Chhattisgarh States Agency was at Raipur and the headquarters of the Bengal States Agency was at Calcutta. After the withdrawal of the British from India in 1947, the states acceded to the new Union of India and some of the states formed the Eastern States Union, an organization that failed. Later they were integrated into the Indian states of Madhya Pradesh, Bihar, West Bengal and Orissa. The eastern portion of Madhya Pradesh and the southern portion of Bihar became the states of Chhattisgarh and Jharkhand, respectively, in November 2000.

The Chota Nagpur Feudatory States or Chota Nagpur States were a group of non-salute states (minor princely states) at the time of British Raj, located on the Chota Nagpur Plateau. British suzerainty over the states was exercised through the government of the Bengal Presidency.

These states were nine in number and they became part of the Indian states of Madhya Pradesh, Bihar and Orissa following Indian Independence. 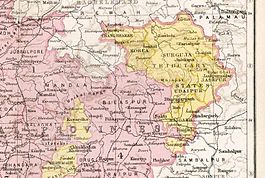 In the 18th century, the states came within the sphere of influence of the Maratha Empire, but they became tributary states of British India as a result of the Anglo-Maratha Wars in the early 19th century.

In October 1905, the exercise of British influence over the predominantly Hindi-speaking states of Chang Bhakar, Jashpur, Koriya, Surguja, and Udaipur was transferred from the Bengal government to that of the Central Provinces, while the two Oriya-speaking states of Gangpur and Bonai were attached to the Orissa Tributary States, leaving only Kharsawan and Saraikela answerable to the Bengal governor.

In 1936, all nine states were transferred to the Eastern States Agency, the officials of which came under the direct authority of the Governor-General of India, rather than under that of any Provinces.

After Indian independence in 1947, the rulers of the states all chose to accede to the Dominion of India. Changbhakar, Jashpur, Koriya, Surguja and Udaipur later became part of Madhya Pradesh state, but Gangpur and Bonai part of Orissa state, and Kharsawan and Saraikela part of Bihar state.

In November 2000, the new states of Chhattisgarh and Jharkhand were separated from Madhya Pradesh and Bihar, respectively.

Patna , or Patnagarh, was a princely state in the Central Provinces of India during the British Raj. It had its capital at Balangir (Bolangir). Its area was 6,503 km2 (2,511 sq mi).

Until 1947, it was not part of British India but was subject to the suzerainty of the British crown, under the Orissa States Agency.

In 1947, at the time of the Indian independence, Patna’s ruler did not immediately accede to the newly independent Union of India, delaying accession until 1948. The present day Balangir district is almost coterminous with the boundaries of the former state.

The last ruler of Patna, Rajendra Narayan Singh Deo, built a new career as an elected politician and served as Chief Minister of Orissa from 8 March 1967 to 9 January 1971.

The rulers of Patna princely state belonged to the Chauhan Rajput Dynasty and were granted a hereditary salute of 9 guns by the British.