Before the Partition of India in 1947, hundreds (565) of Princely States, also called Native States, existed in India which were not fully and formally part of British India but enjoyed a British protectorate and indirect rule. These were the parts of the Indian subcontinent which had not been conquered or annexed by the British, often former vassals of the Mughal Patshah (Emperor).

Various Princely states , as they existed during the British raj prior to 1947 :-

Maharaja Bahadur KAMAL SINGH, 15th Maharaja of Dumraon since 13th November 1949 and were belong to Parmar dynasty. Horilshah founded this town, and so it was earlier known as Horilnagar. Horilshah was a descendant of “Raja Bhoj of Dhar” and came from Ujjain. As a princely state its boundaries were the rivers Ganges & Son and included part of Uttar Pradesh. Dumraon royal Palace belongs to Rajput Panwar (parmar) ujjaini Royal Rajputs in Bihar. Maharaja of Dumraon KAMAL SINGH established Maharaja Bahadur Ram Ran Vijay Prasad Singh College (now Maharaja College) at Arrah and donated land for educational institutions in Shahbad and Ballia in 1954; that same year the Maharani Usha Rani Girls School was founded at Raj Garh Dumraon by the Maharani Saheba, it was the first Girls School in the Area; he donated 15 acres of land to the Methodist Church for the T.B. Hospital, Pratap Sagar. Maharaja of Dumraon Kamal Singh was elected to Parliament in 1952 and again in 1957 from Buxar Lok Sabha Constituency.

Gidhaur  was one of Princely State among 568 princely states  in India before the Partition of British India in 1947. Kings of Rajput Chandel descent ruled on erstwhile Patsanda for more than three centuries. Raja Malpurana founded this zamindari state in 1596. Patsanda was renamed Gidhaur by the name of railway station situated at 2 kilometer far from town and established by British. Minto Tower Situated in the middle of the main market in Gidhaur. Minto tower was built by Maharaja Ravaneshwar Prasad Singh ‘Bahadur’of Gidhaur to commemorate the visit of Lord Minto, the then Viceroy and Governor General of India, who visited Gidhaur on February 10, 1906. Maharaja of Gidhaur Pratap Singh was elected to Parliament in 1989 and again in 1991 on Janta Dal ticket from Banka Lok  Sabha Constituency.

The Saraikela State was founded in 1620 by Raja Bikram Singha descendant of the rulers of Porahat, who claimed descent from the Rathore clan of Rajputs. Porahat or Singhbhum Kingdom was a part or feudatory of Ganga Vanshi, Surya Vanshi Gajapati rulers of Orissa.

Former Chief Minister of Orissa Rajendra Narayan Singh Deo was born to Raja Aditya Pratap Singh, the ruler of the princely state of Seraikela and Rani Padmini Kumari Devi. He was adopted by Maharaja Prithwiraj Singh Deo of Patna state. The last ruler of the Seraikela princely state was HH Raja Aditya Pratap Singh Deo. The Singh Deo royal family remains active in public life(political, cultural and religious)and act as guardians to the Ma Paudi temple located within the Royal residence, host the annual Chau Festival at the Seraikela Royal Palace. Despite their loss of formal title and privileges, they enjoy public support in the area..Notable members of the royal family who remain active in the public eye include Rajkumar Pratap Aditya Singh Deo, Rajkumar Juga Bhanu Singh Deo,Maharajkumar Jairaj Singh Deo and Rajkumar Rajvikram Singh Deo. Raja ADITYA PRATAP SINGH Deo, Raja of Seraikela ruled till the merger of the Princely States into the Indian Union, he signed the Instrument of Accession and the ‘Merger’ Agreements, elected M.L.A. (Bihar) in 1957 from Saraikela. Tikayat Nrupendra Narayan Singh Deo elected M.L.A. (Bihar) in 1962 from Saraikela.

Kharsawan or Kharsuan was one of the Oriya speaking Princely states of India during the period of the British Raj, and was acceded to India after India gained independence. Earlier this area was a part of Orissa’s Kalinga-Utkala Empire of the Gajapati Kings.It is now a part of Jharkhand, India, and one of its districts is named Seraikela Kharsawan district. It had a privy purse of 33,000INR. Title of Raja was given to Kharswan Ruler in 1902 to Raja Ram Chandra Singh Deo.

Ramgarh Rajwas a major Zamindari (baronial) estate in the era of the British Raj, in the former Indian province of Bihar. Major districts that came under the Ramgarh Raj were Hazaribagh, Koderma, and Bokaro. The entire area is rich in minerals like coal and mica and falls under the Indian State of Jharkhand.  Raja Bahadur Kamakhya Narain Singh of Ramgarh, Jharkhand entered politics in 1946 following the formal accession of the Ramgarh state into the Indian Republic. In the Bihar Assembly Elections of 1967, serious opposition was offered by the Raja Bahadur’s Swatantra Party to the ruling Congress government. Many of his family members became important political functionaries and legislators.

Raja Bahadur Kamakhya Narain Singh was the last ruling chief of the Ramgarh Raj. In 1945, he ceded control to the Indian government. Became Cabinet Minister in the government headed by Chief Minister of Bihar Sri Mahamaya Prasad Sinha. Five times elected to the Bihar Vidhan Sabha from Barkagaon in 1952, 1957 from Giridih, 1962 from Barhi, 1967 from Jalalpur& 1969 from Chatra.

Raja Bahadur Saurabh Narain Singh assumed the position of head of the family in November 2008. M.L.A from Hazaribagh.

The Zamindar is a member of the Junior branch of the Seraikella Royal Family belong to Rathore dynasty  and was founded by Kunwar Damodar Singh, second son of Raja Abhiram Singh of Seraikella, who was granted Icha Pir by way of ‘Kharposh’ in 1803. Icha was a part of Kuchung when Raja Abhiram Singh annexed the former Zamindari of Mayurbhanj. The title of ‘Pir-Pati-Dar’ was conferred on him with revenue powers.

Shattru  Mardan Shahi, Zamindar of Dumaria, a politician who shaped the politics of Bihar, lived lavishly like any other Zamindar or Maharaja in the Pre-Independence era. They belong to the Bisen dynasty.  His interests were no less than the ones of any Maharaja at that time, particularly with his fondness for imported luxury cars. He was elected as a member of the Bihar Legislative Assembly in 1964 and became the Education minister of Bihar in 1969 after declining the post of Chief Minister and offering it to B.P. Mandal. He married Chandra Ketki Devi, the daughter of the Zamindar of Panchgachhiya in Saharsa Distt., who was one of the wealthiest landowners in Eastern India.

It belong to Gor dynasty(Surwar Rajput). Raja Goverdhan Prasad Singh,  Raja Saheb of Ranka since 1970.  Raja of Ranka donated land at Daltonganj to build the Giriwar High School and in Garhwa to build the Gobind High School; he also donated 111,101 acres of land to the Vinoba Bhaves Bhoodan Initiative; Kumar Gopinath Singh, M.L.A. from Garhwa and former Minister in Bihar & Kumar Girinath Singh, M.L.A. from Garhwa & became Minister in Jharkhand belongs to Ranka.

Kursela was a Zamindari under British India. R. B. Raghubansh Prasad Singh was the last zamindaar of Kursela. Kursela had a young artist Sri Awadesh Kumar Singh, MP, son of the Zamindaar of Kursela and proprietor of the Kursela estate, R.B. Raghubansh Prasad Singh, whose paintings were exhibited at New Delhi under the tenure of Dr. S Radhakrishnan as the President. R.B. Raghubansh Prasad Singh was a great philanthropist, and administrator. He was the largest land donor in Vinobha Bhave’s “Bhudan movement”, wherein he donated 8,000 acres (32 km2) of land. He sponsored the opening of 2 schools and a hospital in Kursela. He also donated many houses and land to the congress party including “Kala Bhavan” in Purnea.

His younger son Sri Dinesh Kumar Singh was a Cabinet minister in the Bihar govt. for over 20 years and held portfolios including Health, Education, and Home. He died in 2005. His valuable contributions to the development of Bihar will not be forgotten by the people of Kursela.

They were locally known as Ujjainya Rajputs because of the place of their origin, Ujjain and Belong to Parmar dynasty.  Basant Singh born 1949, he represented Dumraon as member of the Legislative Assembly (M.L.A) from 1985 to 2000; he served as Minister for Building and Construction in the Government of Bihar.

Estates were classified into three classes:-

CLASS I – permanently settled estates, which includes, all estates so settled whether –

estates were settled from the date of the dicennial settlement

estates formerly the property of Government, the proprietary right in which, has been sold to private persons, subject to a revenue fixed in perpetuity

estates once the property of Government, the proprietary right in which, has been sold to private persons, subject to a revenue liable to to periodical revision

those settled for periods with the proprietors

those managed for proprietors

those owned by Government as proprietor

Bettiah Raj: The largest estate (area wise) in the province of Bihar. There were two-three 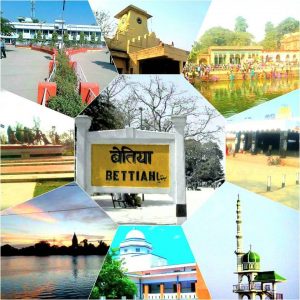 other prominent estates which emerged out of Bettiah Raj at a later date. The most prominent ones are Sheohar Raj and Madhuban Raj, but all of them share the same ancestry. To get a complete picture of the family lineage of the Bettiah Raj and Sheohar Raj in particular, it is suggested to go through the book named ‘Shaktapramod’.

Sheohar Estate : Earlier a part of Sitamrih District, Sheohar is now a district in itself. The “Nandan Singhs” of Sheohar are now mainly residing in Patna/Muzaffarpur/Delhi

Hathua Maharaj: in Saran District of Bihar, they are close kin of Deoria situated Tamukhi Raaj. Currently its Maharaja is Maharaja Bahadur Sri Mrighendra Pratap Sahi is an Industrialist.

Tamkuhi Raaj : in Deoria District of EAST UP .One of the oldest hereditory rajas for more than 117 generations.

Babhangawaon Estate : It is situtaed at Deoghar District (Santhal Pargana) of Jharkhand. They are Chitpawan Brahmins migrated from Maharastra . They have a dominance over the area.

Raja Raj Dhanwar : It is situated at Giridih District (North Chotanagpur) of Jharkhand. They are Chitpawan Brahmins migrated from Maharashtra . They are well reputed and big landlords.