TheFolk Dances of Bihar are:

Bidesia is a very popular Folk Dances of Bihar. It is a Folk theatre form that is prevalent  in the Bhojpuri-Speaking regions of Bihar. Bihari Thakur is believed to be the father of this Dance form.He raised conflicting issues prevailing in the Society. Themes in his work were conflicting trends between rich and poor, upper caste and lower caste.Bidesia is a dance version of Biraha songs. Biraha Songs Combined with Dance become an effective medium.

Are portrayal of pain of the women who are left alone behind by their men.

This is the most popular folk dance of North Bihar, Especially the Mithila and Kosi Region. Originally the dance was about separation of lovers ‘Jat’ and ‘Jatin’ but now the play reflects on may social issues like droughts, floods and poverty.

Jhijhia:
Jijya or Jhijhia is one of the most eminent dances of Bihar, Jhijhia depicts a band of young belles adoring and offering. Rain plays crucial role in agriculture. When there is a total drought and there is not even a single drop of water anywhere, the lands are cracked and parched, the sky is lifeless without clouds and the people are awaiting rains-this is the time when the village women pray to lord Indra for rain. They sing and dance to please the Lord of Rain with their deep devotion. Such type of dance

is called Jhijhia.
This is the message of the most eminent folk dance of Bihar. The performers for this ritualistic dance include a lead singer, harmonium player, bansuri player and a drummer to play the dholak. There are two female singers popular for their rhythmic language, sweet songs appealing music. 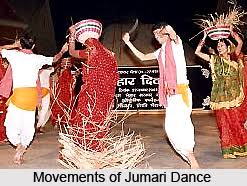 The folk dance of Jumari is performed especially in Mithilanchal of Bihar. This dance of Bihar is similar to that of ‘ Garba performed in Gujarat.’ Only married women performs, hence it also signifies a good omen. After the month of Ashvin in September- October, the next one is the Kartik month and at this time, the sky becomes crystal clear, without any traces of clouds. The full moon looks attractive and spreads its milky rays in all directions. Such a romantic atmosphere gets the married women to go on dancing, singing and celebrating the funs of the season. Actually, Jumari is related to the season. 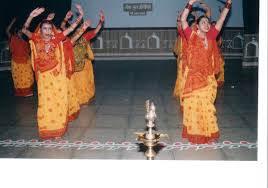 The pleasant change that has come due to the rainy season. Not only the change in the nature, but also the mental refreshment and relaxation that is associated with human beings is well described in these kinds of songs. Kajari songs produce a sweet sensation body and it is sung from beginning of the shravan month with the rhythmic note of raindrops.

Sohar, having its own distinctive diction, is a ceremonial dance to celebrate the ple

asure of new birth in a family. It is celebrated all over the country with different traditional rituals. Sohar is sung in Bihar on the occasion of birth of a child. While singing, ladies praise the child with Lord Rama, sometimes with Lord Krishna and with many other gods. This is a very important function, where all women gather and enjoy. The ladies bless the baby while singing and acting the tender words of Sohar ‘Marchia baithal sasu pucheli’. –employed as a single unit, as his language. This body language is extremely poetic and powerful. The legs form an effective means of communicating the expression. Although the face is covered by the mask it mysteriously expresses the feelings to be communicated. 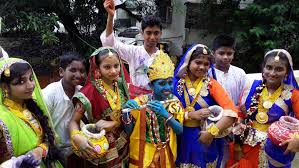 Holi is a festival of colours celebrated all over the country. People celebrate it on the first day of the Hindu Calendar, that is Pratham Chairtra Mass’ (February-March). The well known festival Holi conveys the message for religious integration apart from any sort of bigotism. In Bihar, a typical style ‘Dhamar of holi song is sung in which the villagers celebrate it in a form of group with full joy and dance with musical instruments like dholak, Jhal-manjeera, etc. This dance is related to the mythical story of Bhakt Prahlad and his demon father Hiranyakshipu.

Traditionally Domkach is played in Mithila region. The word kacchab means in old Maithili to play the role of or to mimic some one. So, domkach means ‘playing 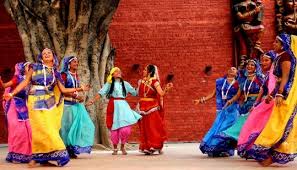 other’s role by the men of dominant caste’
The ladies bless the baby while singing and acting the tender words of Sohar “Marchia Baithal sasu pucheli” There are various other forms like the Dhangar of Purnea and the flok dances of the non-tribles in the belt.There is also a Bakho Nach, in which the husband and wife dance together on the occasion of the birth of a child in the family, and similar festive occasion. 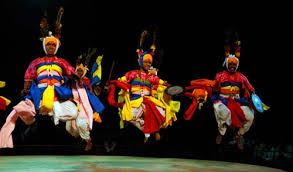 It is a dance of Martial character. The Paika dance is performed with a shield and a sword. The Basic objective of the dance performance was the development of physical excitement and consequently increases the courageous activities in the dancing warriors.