Fairs and Festivals of Bihar

Sonepur Cattle Fair
Legend apart, the famous Sonepur fair in more of a cattle trading centre where incredible number of birds and cattle are brought from different parts of the country. Besides, the bewildering array of wares are on sale and add to this the numerous folk shows about which the BBC once remarked, “there’s nothing like the Sonepur Cabaret.” The time to start is very early in the morning when the fog is suddenly pierced by the sun and the huge gathering has just emerged from the holy dip in the cold absolving waters. The mela that lasts upto a fortnight, provides enough time to talk to the parrots, watch the elephants being bathed leisurely, followed by ear splitting trumpets and then the artists working up with colourful designs to decorate the elephants as if the pachyderm has been tatooed all over, see the horses being tested for their speed and stamina, big bulky buffaloes being milked and likewise all other animals demonstrating their skill, strength and productivity.

By midday, it is the cacophony of strong decibels pouring in from all corners as the huge gathering becomes denser with more and more people adding to the sound and sight of the landscae. Ash smeared, saffron clothed holy men blow their conches and bang their gongs. Loudsspeakers, from various folk shows and jugglers rent the air together with the unison from the animals. Much before the sun sets in, flames and fumes of dung fire burning at different places appear to screen the sky in a very amusing way, as if some mediveval army has just camped for the night. and it is time to share a gossip with one of the villagers who may better summarise the stock and sale of the cattles for the day. Zesty snacks together with tea comes in from the open air restaurant.

Nag Panchmi
The rainy month of Sravana when there is danger of death from snake bite, people appease the snake god by offering milk during Nag Panchmi. The prime centre of naga worship is Rajgir and Mahabharata describes this place as the abode of serpents and excavations have revealed numerous objects used in serpent cult. In fact naga worship is wide spread through out India.
Makar Sankranti Mela
Famous Makar Sankranti mela is another festival unique to Rajgir in the month of Paus, corresponding to mid January. Devotees make flower offerings to the deities of the temples at Hot springs and bathe in the holy water. Another historic place associated with fifteen day long Makar Sankranti mela is the Mandar hills in Banka district. Puranic legends accounts for a great deluge which witnessed the creation of a Asura that threatened the gods. Vishnu cut off the Asura’s head and piled up the body under the weight of the Mandar hill. The famous panchjanya – the sankh (counch shell) used in the Mahabharat war is believed to have been found here on the hills. Traces, akin to serpent coil can be seen around the hill and it is believed that the snake god offered himself to be used as a rope for churning the ocean to obtain the amrit (nectar).
Gaya-Buddhist Pilgrimage Center
Gaya is another holy dot in Bihar, famous for the International Buddhist Gathering and the rallying point is the Mahabodhi tree and the adjacent temple. The occasions are Buddha Jayanti (Buddha was born on this day, he attained enlightenment on this day and also attained Nirvana on this day ) and in the month of Vaisakh (April/May) and the annual session of Dalai Lama in December. Mahavir Jayanti is celebated in April with much fanfare on the Parsvanath hill and also at Vaishali while Deo Deepawali, marking the attainment of Nirvana by Mahavira is celebrated best at Pawapuri, ten days after Deepavali.

Gaya – Pitrapaksha Mela
Arond september the sleepy town of Gaya is agog with people who come here for the famous Pitrapaksha mela or the ancestor worship typified in Sraddha ritual. It is time for the Gayalis (the descendants of Magga Brahmans who were once devotees of Shiva but later converted to Vaishnavism) to be prepared for the vedic Sraddha ceremonies or the pindan – a mandatory Hind rite that is supposed to bring salvation to the departed soul. In the early Dharmasastras, Vishnu provides a list of over 50 tirthas but it proclaims that dead ancestors pray to God for a son who would offer pinda (lymph of rice) to them at Gaya.

The tradition traces its history to the time of Buddha, who is believed to have performed the first pindan here. Turning the pages of earlier history, one comes across the Puranic legend that ascribes Gaya as one of the holiest spots of the world. The Asura, named Gaya become so powerful that the gods felt threatened and thus thought of eliminating him. As a precondition to his death, the Asura demanded that be should be buried in the holiest spot of the world. This place is Gaya.

Vishnupada Temple Mela
The central point of the Hindu pilgrimage in Gaya is the Vishnupada temple built by Rani Ahilyabai of Indore in 1787. The spot on which it stands is associated with the famous mythological event of Vishnu killing Gaya and leaving his footprints on the rock which is the main point of worship in the temple. The Shraddha is customarily performed under a fig tree while the women pilgrim perform it indoors as gayawal women live under strange customs, for instance, they never stir out of the house, married girl continues to get her daily ration from her parents. They can adopt a child or even an adult, who may assist her in their work. The Gayawals are believed to maintain centuries old records of the pindans performed under the supervision of their ancestors and accordingly people prefer the specific family of Gayawals who might have served their ancestors as well.

Though Bihar is in league with festivals like Holi, Dussehra, Deepavali but chaath puja (6 days after Deepavali) is Bihar’s prime festival honouring the sun god. Unlike the zestful Holi or the expensive Deepavali) Chaath is a festival of prayer and propitiation observed with solemnity. It is an expression of thanks giving and seeking the blessings from the forces of nature, prominent among them being the Sun and river. The belief is that a devotee’s desire is always fulfilled during Chaath. Simultaneously an element of fear is alive among the devotees who dread the punishment for any misdeed during Chaath. The city remains safe during this time when criminals too prefer to be a part of the good.
Chaath-Fasting

Chaath in Bihar can best be seen at Deo in Aurangabad or Baragaon near Nalanda, noted for their sun temples. Unlike other sun temples in India that faces East, the temple at Deo faces west and during the festival time it is the most crowded place. It is strange to see a Brahmin standing in the river water next to a Harijan ! The festival is more of a sacrifice which entails purificatory preparation. It can be performed by men or women, irrespective to caste or creed. Chaath commences with the end of Deepavali when the house is thoroughly cleaned, family members go in for a holy dip, strict saltless vegetarian menu is observed (even onions and garlic are considered unwanted during the entire festival period), all earthen vessels are reserved for the period only and all possible purity of food is adhered to; clothes have to be unstitched and people sleep on the floor. 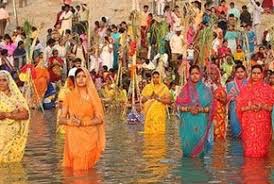 The person observing the Chaath (known as Parvati) observes dawn to dusk fast which concludes with sweets. This is followed by another fast for 36 hours till the dawn of the final day when puja commences at the river bank much before sunrise. The disciplined parvatis remain in water from late midnight until the ray of dawn streaks the horizons. The river is now flooded with offerings to the sun which is followed by breakfast and distribution among the gatherings.

Bihula, or Bishahri Puja takes place mostly on the eastern parts of Bihar,especially in the Bhagalpur region. festival is centered around the tale of Bihula, a woman who saved her family from venomous snakes. On this day, worshippers offer prayers to Goddess Mansa, who is said to offer protection from snake bites. The festival is also closely linked to the Manjusha Paintings that depict the legend of Bihula and Mansa.

Madhushravani is festival of Mithila region which held during the month of Shravan (July to August). The rituals of Madhushravani are performed primarily by new brides. Snake worship is part of the celebration and this festival continued for 15 days.

This festival is celebrated in the Mithila region of Bihar dedicated to the brother- sister relationship. It is time when birds migrate from the Himalayas to the plains heralding the beginning of this festival with the girls making and decorating clay idols of various birds and kitchen item.

Ramanavami festival is celebrated with traditional reverence and gaiety in Bihar with people observing seven days fasts. This is the auspicious day when lord Rama was born. Temples dedicated to Lord Rama are beautifully decorated and special prayers are carried out.

Shravani Mela is organized along the 108-km route that links Sultanganj and Deoghar in Jharkhand in the Hindu month of Shravan, that is the lunar month of July-August. Lakhs of “Kawarias” of pilgrims, wearing saffron, collect water from the sacred river Ganga at Sultanganj and walk barefoot to Deoghar in Jharkhand where they bathe a sacred Shivalinga with the water brought from Sultanganj-as their holy offering or service.

Saurath sabha is held at every year for a fortnight in the month of June, the village of Saurath in Madhubani district witness a unique gathering of Mithila Brahmins from all over India. It is called Saurath Sabha and biggest market of Marriage. Parents of marriageable children bring horoscopes and negotiate marriages in a vast mango grove.

The Hilly Retreat or The ancient capital of Magadha Kings – RAJGIR; host colorful festival of dances and music during the last week of December every year. This festival is known as Rajgir Mahotsav. This festival comes up with vibrant classical and folk art and culture performances. The live performance by artist in ancient Magadha capital gives Rajgir Mahotsav an ultimate destination for the connoisseurs of Indian Cultural form of expression of the self.

During Rajgir Mahotsav a visitors got chance to see variety of events. Rajgir host artisans from all across country with their traditional handicrafts. Every day Classical music and dances are performed by well renowned artists. The occasion is almost as a carnival.

We at Visit Bihar operate tours during Rajgir Mahotsav. Our tours cover the live artistic performance in the Event programs with guided tour to historic city of Rajagriha or Rajgir.