Bihar, the ancient land of Buddha, has witnessed golden period of Indian history. It is the same land where the seeds of the first republic were sown and which cultivated the first crop of democracy. Such fertile is the soil that has given birth to in numerous intellectuals which spread the light of knowledge and wisdom not only in the country but in the whole world. The state has its capital at Patna, which is situated on the bank of the holy river Ganga. The state as it is today has been shaped from its partition from the province of Bengal and most recently after the separation of the tribal southern region now called Jharkhand.

During most of British India, Bihar was a part of the Presidency of Bengal, and was governed from Calcutta. As such, this was a territory very much dominated by the people of Bengal. All leading educational and medical centres were in Bengal. In spite of the unfair advantage that Bengalis possessed, some sons of Bihar rose to positions of prominence, by dint of their intelligence and hard labour. One such was Rajendra Prasad, native of Ziradei, in the district of Saran. He became the first President of the Republic of India.

When separated from the Bengal Presidency in 1912, Bihar and Orissa comprised a single province. Later, under the Government of India Act of 1935, the Division of Orissa became a separate province; and the Province of Bihar came into being as an administrative unit of British India. At Independence in 1947, the State of Bihar, with the same geographic boundary, formed a part of the Republic of India, until 1956. At that time, an area in the south-east, predominantly the district of Purulia was separated and incorporated into West Bengal as part of the Linguistic Reorganization of Indian States. 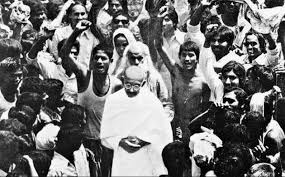 Champaran is a district in the state of Bihar. Under Colonial era laws, many tenant farmers were forced to grow some indigo on a portion of their land as a condition of their tenancy. This indigo was used to make dye. The Germans had invented a cheaper artificial dye so the demand for indigo fell. Some tenants paid more rent in return for being let off having to grow indigo. However, during the First World War the German dye ceased to be available and so indigo became profitable again. Thus many tenants were once again forced to grow it on a portion of their land- as was required by their lease. Naturally, this created much anger and resentment.

At the persistent request of a farmer, Raj Kumar Shukla, from the district of Champaran, in 1917 Gandhiji took a train ride to Motihari, the district headquarters of Champaran. Here he learned, first hand, the sad plight of the indigo farmers suffering under the oppressive rule of the British. Alarmed at the tumultuous reception Gandhiji received in Champaran, the British authorities served notice on him to leave the Province of Bihar. Gandhiji refused to comply, saying that as an Indian he was free to travel anywhere in his own country. For this act of defiance he was detained in the district jail at Motihari. From his jail cell, with the help of his friend from South Africa days, C. F. Andrews, Gandhiji managed to send letters to journalists and the Viceroy of India describing what he saw in Champaran, and made formal demands for the emancipation of these people. When produced in court, the Magistrate ordered him released, but on payment of bail. Gandhiji refused to pay the bail. Instead, he indicated his preference to remain in jail under arrest. Alarmed at the huge response Gandhiji was receiving from the people of Champaran, and intimidated by the knowledge that Gandhiji had already managed to inform the Viceroy of the mistreatment of the farmers by the British plantation owners, the magistrate set him free, without payment of any bail. This was the first instance of the success of civil-disobedience as a tool to win freedom. The British received, their first “object lesson” of the power of civil-disobedience. It also made the British authorities recognize, for the first time, Gandhiji as a national leader of some consequence. What Raj Kumar Shukla had started, and the massive response people of Champaran gave to Gandhiji, catapulted his reputation throughout India. Thus, in 1917, began a series of events in a remote corner of Bihar, which ultimately led to the freedom of India in 1947.

It was natural; therefore, that many people from Bihar became leading participants in India’s struggle for independence. Dr. Rajendra Prasad has been mentioned above. Another was Jay Prakash Narayan, affectionately called JP. JP’s substantial contribution to modern Indian history continued up until his death in 1979. It was he who led a movement that led to massive win of a non-Congress government -The Janata Party – at Delhi, for the first time. With the blessings of JP, Morarji Desai became the fourth Prime Minister of India. Sadly, soon after attaining power, bickering began among the leaders of the Janata Party which led to the resignation of Shri Desai as the Prime Minister. JP continued with his call for “total revolution”, but he succumbed to kidney failure at a hospital in Bombay in 1979. Subsequent bickering in the Janata Party led to the formation of a breakaway political party – the Janata Dal. This political party was a constituent unit of the then ruling coalition at Delhi, the so called, United Front. It was also from this party that Laloo Prasad Yadav, the Chief Minister of Bihar was elected. The bickering continued. A new party led by Mr. Yadav was formed as – the Rashtriya Janata Dal – which went on to rule for almost 15 years in Bihar. 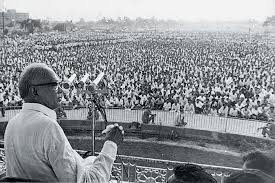 ShaheedBaikuntha Shukla was another nationalist from Bihar, who was hanged for murdering a government approver named PhanindrananthGhosh. This led to the hanging of Bhagat Singh, Sukhdev and Rajguru. PhanindranathGhosh hitherto a key member of the Revolutionary Party had betrayed the cause by turning an approver and giving evidence, which led to his murder. Baikunth was commissioned to plan the murder of Ghosh. He carried out the killing successfully on 9 November 1932. He was arrested, tried, convicted, and, on 14 May 1934, he was hanged in Gaya Central Jail

This was also a period when Hindi literature came to flourish in the state. Raja Radhika Raman Singh, Shiva PujanSahay, Divakar Prasad Vidyarthy, Ramdhari Singh Dinkar, Ram BrikshaBenipuri, are some of the luminaries who contributed to the flowering of Hindi literature, which did not have much of a long history. The Hindi language, certainly its literature, began around mid to late nineteenth century. It is marked by the appearance of BhartenduBabuHarischandra’s(a resident of Varanasi in U.P.) drama “Harischandra”. DevakiNandanKhatri began writing his mystery novels in Hindi during this time (Chandrakanta, ChandrakantaSantati, Kajarki Kothari, Bhootnath, etc.) He was born at Muzaffarpur in Bihar and had his earlier education there. He then moved to Tekari Estate in Gaya in Bihar. He later became an employee of the Raja of Benares (now Varanasi.) He started a printing press called “Lahari” which began the publication of a Hindi monthly, “Sudarshan”, in 1898. One of the first short stories in Hindi, if not the very first, was “Indumati” (Pundit KishorilalGoswami, author) which was published in 1900. The collection of short stories “RajaniaurTaare” (AnupamPrakashan, Patna, publishers) contains an extended history of the origin and evolution of the short story as a distinct literary form in the Hindi literature.