Expansion, inclusion, and rapid improvement in quality throughout the higher and technical education system by enhancing public spending, encouraging private initiatives, and initiating the long overdue major institutional and policy reforms forms the core of the government policies in India (UGC, 2008). The state wise distribution and growth of colleges during the last 55 years has clearly revealed that the distribution and growth of institutions across states in the country is far from uniform. Comparative picture of these institutions during the year 1955-56, 1970-71 and 2009-10 have shown massive expansion of institutions for higher education across all states. However, this expansion is biased towards colleges for general education and professional colleges have shown relatively lesser growth during the period. During 1955-56, number of colleges for general education was 53 in Andhra Pradesh, 55 in Bihar, 42 in Kerala, 14 in Odisha, 79 in Punjab and 70 in Uttar Pradesh. During 2009- 10, the number of colleges in these states has increased to 1970, 817, 192, 634, 234 and 2,361 respectively. As regard to growth of professional colleges is concerned, states like Andhra Pradesh, Madhya Pradesh, Uttar Pradesh and West Bengal has witnessed sustainable growth during the period 1956-57 to 2009-10. In Andhra Pradesh, number of colleges for professional education has increased from 23 in the year 1956-57 to 2,503 in 2009-10. Similarly, in Punjab, Rajasthan and Uttar Pradesh number of colleges for imparting professional education has increased substantially (from 30 to 344, from 15 to 475 and from 44 to 743 respectively) during the period. Contrary to this trend, Bihar has witnessed a very marginal increase in the number of colleges for professional education, from 27 in 1956-57 to 214 in 2009-10. Although, the growth was quite impressive during the first 20 years of independence, but later on after 1970s it has shown a sluggish growth as compared to other states of the country.

It is evident from above analysis that, all types of institutions have witnessed manifold increase in states like Andhra Pradesh, Kerala, Punjab, Rajasthan and Uttar Pradesh. Considering the importance of technical education for human capital formation, it is imperative to have a deeper analysis of the growth pattern of some of the professional institutions across states. It has been observed that during 1955-56, number of engineering colleges was only four in Andhra Pradesh, one in Kerala, three in Punjab, two each in Rajasthan and Uttar Pradesh. During 2009-10, the number has increased to 698, 98, 82, 96 and 212 respectively. Similar trend has been observed in these states in case of colleges for medical, agriculture, teacher training and polytechnic education during the period. Contrasting to the objective of expansion, the growth of all types of institutions in Bihar is either marginal or stagnant during the period under study. During 1955-56 to 2009-10, the number of agriculture college has increased from merely two to three, engineering colleges from five to ten, medical colleges from 7 to 37, colleges for teacher training from 5 to 33 and polytechnic institutions has increased from 3 to 17. There are comparatively fewer institutions offering technical education in the State. The lack of facility for providing technical education can be a major reason for the backwardness of the State. This also leads to discontent among the students in particular and society at large.

Recognizing the changing context of the scientific enterprise, and to meet present national needs in the new era of globalization it is necessary to impart technical education qualitatively and quantitatively. Bihar shares 8 per cent of total population of the country but it shares only about 0.35 per cent of engineering colleges, 1.78 per cent of medical colleges, 0.89 per cent of polytechnics and 0.8 per cent of management colleges of the country. There are only 37 medical colleges and 10 engineering colleges in the State. The corresponding figures for Andhra Pradesh are 415 and 698, for Tamil Nadu 198 and 440, for Karnataka 423 and 174 and for Maharashtra 141 and 312 respectively. At present, there are only 17 polytechnics in the state which is extremely low as compared to other states like Uttar Pradesh (163), Karnataka (273), Tamil Nadu (363) and Maharashtra (227). There is huge shortfall in the number of colleges for IT education. Disciplinary orientation of colleges shows that during 2009-10, 817 colleges are multidisciplinary in nature, 10 are for engineering and related education, 37 are for medical, 33 for teacher training and 134 other institutes which includes institutions for law, agriculture management studies, etc. This implies that general education in the State has been accorded more importance than professional and technical education.

The current economic super powers are synonymous with the advanced and developed service economy. In current globalized era, demand for managers is increasing to support the growth of a company and the whole economy. There is severe lack of skilled manpower due to absence of management schools in the state. This absence of professional colleges is also affecting the 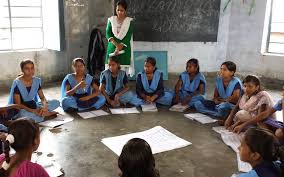 Number of colleges per lakh population

Gross Enrollment Ratio (GER) indicates the capacity of the education system to enroll students of a particular age group. In simple terms, it shows the general level of participation in a given level of education. A high GER generally indicates a high degree of participation. A GER value approaching 100 per cent indicates that a country is, in principle, able to accommodate all of its school-age population. As against the national average of 15.0 per cent, the GER in higher education for Bihar is 11.0 per cent which is much below the national average. The GER figure for Kerala (13.1), Maharashtra (21.4), Andhra Pradesh (16.9) and Karnataka (18.1) are much above the national average. GER in higher education for females is also very low (7.5) in the State.

Recent Initiatives by the Government of Bihar

It is heartening to note that the state government in recent years has taken some initiatives in a planned manner to revive the higher education system in the state. Several new institutions were established in last couple of years. The proposals of several other institutions are in pipeline. Some of the institutions which were established recently are: Patna extension center of BIT Mesra, Indian Institute of Technology –Patna, Central University of Bihar- Gaya, National Institute of Pharmaceutical Education and Research – Muzaffarpur, National Institute of Fashion Technology-Patna, Chanakya National Law University, and Chandragupt Institute of Management both in Patna. The Aryabhatt Knowledge University has also started its operation in Patna. Steps are taken to revive the ancient Nalanda University as Nalanda International University. With the objective to equip students with the latest skills and customized short-term training programs at an affordable cost, Bihar Knowledge Center has been established by Government of Bihar. The proposal for opening of few more specialized universities and institutions are under consideration. They are Rashtra Kavi Ramdhari Singh Dinkar Hindi University, Women’s University, Sports University and Bihar University of Information Technology. Four more engineering colleges will soon be operational at Chhapra, Madhepura, Begusarai and Sitamarhi districts of the state.

In ancient times, Bihar had well governed administrative system in the country. Education sector was well developed with universities like Nalanda and Vikramshila attracting students from all over the world. But, Bihar with such a glorious history of education and learning in the past is currently one of the most educationally backward states of the country. It is evident from the preceding analysis that the situation of higher education system in Bihar is rather depressing. The current status of higher education in the state is characterized by low enrolment ratio particularly among girls, low completion rate, low college population index and poor qualitative as well as quantitative infrastructure. Gross enrolment ratio in Bihar is amongst the lowest in the country with wide gaps between males and females. The study of the status of educational institutions in Bihar reveals that there is a mismatch between demand and supply of educational institutions. The main problem of the higher and technical education system is its inability to cater to the demand for quality education. Though, several quality institutions were established in recent years, but they are not capable enough to cater the growing demands of the students. Most of the new proposals are pending due to government apathy. There appears to be a correlation between the quantity and quality of higher educational institutions in the State and its economic and industrial development. More number of qualified manpower is a necessary as well as sufficient condition for sustainable growth of the economy. This also implies that regional socio-economic imbalances and the creation of capacity for higher education in the state are mutually related. The deteriorated situation of higher education in the state needs to accord priority.