Nitrogen is found in both free and combined states. It occupies 78.07% by volume. Nitrogen can be prepared:

By heating copper in air:

Firstly, air is passed through lime water and then concentrated sulphuric acid to make the air free from carbon dioxide and moistures respectively. The air contains only nitrogen and oxygen which are passed over the heated copper wire as shown in the figure. Here copper combines with oxygen to make copper oxide and nitrogen gas passes over. This nitrogen can be collected by downward displacement of water. 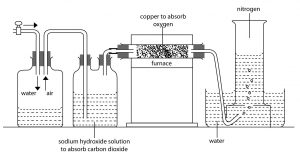 By burning phosphorous in air:

Nitrogen gas can be prepared by burning phosphorous in air. A crucible with phosphorous is taken and allowed to float on water. Then phosphorous is burnt in crucible is covered with gas jar as shown in figure. The oxygen of the gas jar is consumed during the burning of phosphorous penta oxide is formed. The gas left in the jar is nitrogen.
4P + 5O2

By decomposition of compounds containing nitrogen

Like, when dilute solution of ammonium nitrite is heated, nitrogen gas is produced.
NH4NO2→ N2 +2H2O

Principle:
When the solution of sodium nitrite and ammonium chloride is heated they react together and liberate nitrogen gas.
NaNO2 + NH4Cl → NaCl + H2O +N2

Take a mixture of ammonium Chloride and Sodium nitrate in equivalent amount in a round bottom flask. Some water is added to make the solution of the mixture. Then the delivery tube is fitted with a round bottom flask with the help of a cork. The flask is heated gently with a source of heat. After that gas is produced by the reaction of chemicals and is collected in gas jar by downward displacement of water.

Ammonium chloride and sodium nitrite should not be used in solid form because ammonium chloride, being a sublimate, sublimes and escape in form of vapour on heating.

Apparatus should be made airtight.

Ammonium chloride and sodium nitrite should be taken in equivalent amount.

Physical properties of nitrogen is given as,

Nitrogen is a gas without any color, taste and also without any smell which is one of the physical property of nitrogen.

Nitrogen is relatively considered as inert gas which is one of the physical property of nitrogen.

Nitrogen is also considered as the liquid which is similar to water in appearance.

The melting point of the nitrogen is -2100C.

Nitrogen contains the two allotropic forms of solid a and b where the transition takes place in between the two forms at the temperature of -2370C.

Nitrogen has the soluble property; it is less soluble in water which is one of the physical property of nitrogen.

The color of indicators is not affected by the nitrogen since it is a neutral gas which is one of the chemical property of nitrogen.

Nitrogen can combine with other elements and form some compounds under certain temperature which is one of the chemical property of nitrogen..

At high temperature or low temperature nitrogen can form compounds through the biological activity which can act as catalyst.

In accordance with the oxygen nitrogen forms nitrogen dioxide as well as nitric acid.

When nitrogen is combined with the hydrogen it forms ammonia and with sulfur it form nitrogen sulfide.

Nitrogen is combined with certain metals at higher temperatures which forms the active metals such as lithium and magnesium.

Nitrogen is a non flammable compound which does not support the combustion which is one of the chemical property of nitrogen..

After ionization the energy of nitrogen is given as 1402kJ.mol-1.

The electronegativity of nitrogen due to the Pauling method is given as 3.0.

This element is present in virtually all pharmacological drugs. In the form of nitrous oxide it is used as an anesthetic. Cryopreservation also uses the gas to conserve egg, blood, sperm and other biological specimens. The CPUs in computers use the gas to keep them from heating up. X-ray detectors also rely on this element.

Nitrogen tanks are also used as paintball gun power sources. These elements have proven to be so effective in this regard they have replaced carbon dioxide. This non-metallic chemical element can be used to fill aircraft and some vehicle tires. The same element is found in military aircraft fuel systems to combat fire hazards. Other common uses for the element are in steel production and in high voltage equipment.

In the latter case, nitrogen is pressurized and dried first. Integrated circuits, diodes, transistors and other electrical components use it too. Nitrogen is present in liquid explosives so they do not explode.

As stated earlier, the element is present in all living organisms; plants, animals and people. It is the primary figure in amino acids, which are the building blocks of proteins. It is also the basis for neurotransmitters, RNA and DNA. The element is also required in plants and is part of chlorophyll pigment. This is what allows plants to change sunlight into energy.

The same element is present in roots, leaves and grains. Plants do not actually take in atmospheric nitrogen. The element is changed into compounds that plants can soak in. The transformation process is called the nitrogen cycle.

Uses of Nitrogen in Industries

The element is used in controlling pollution. It is effective in getting rid of unstable organic compounds in liquids. Many industries use it to destroy toxic liquids and vapors in industrial tools. As nitrogen dioxide, the element is vital in the industrial sector. It also serves as an oxidation reaction catalyst. Apart from being an oxidizing agent, it can also be used as a flour bleaching agent and rocket fuel.

The element assumes this form at -195.5 degree and below. Its uses include refrigerants and cryotherapy. In the latter it is used to take out actinic keratosis, warts and treat other skin disorders.

This element can be found in the atmosphere. Nitrogen is also present in other forms. When people think of nitrogen, they immediately associate it with the air. But it is also part of the food they eat every day. Since its discovery, scientists have learned a lot about it. Today nitrogen is commercially available. The most common types are nitrous oxide and supercoolant liquid nitrogen.

This element is the lightest in the nitrogen group. The others are arsenic, antimony and bismuth. Nitrogen can join up with other elements. The bonds are very effective because nitrogen’s outermost electron shell has few electrons. That is the reason why it is sometimes used as a buffer gas. Since nitrogen makes up 4/5 of the atmosphere, it is pretty common. The element is vital to life, but few animals use the pure kind. Often it is used in the form of amino and nucleic acids.

The element was first isolated in 1772. But scientists were aware of it long before that time. In its purest form, nitrogen can be dangerous. It can become an asphyxiant by putting oxygen out of place. This is one of the issues with liquid nitrogen; it turns to gas when exposed to room temperature.

The term is applied to the combining of oxygen and nitrogen. The best known variants are nitrogen dioxide (NO2) and nitric oxide (NO). In both instances, one or two oxygen atoms are linked to one nitrogen atom. These oxides have the NOx notation. X symbolizes one or two components of oxygen variables. These elements are generated in engines. According to scientists, too much of these elements in the air causes pollution.

One major cause of pollution are Volatile Organic Compounds (types of chemicals) that join NOx. These two generate smog that dirties the air. That being said, the element has many uses. Scientists are now looking at ways to enhance nitrogen minus these unpleasant elements.

One of the most frequent uses of nitrogen is in light bulbs. Compared to argon, it is less expensive. Some food packages contain this element to stop oxidation. The element’s inertness is the main reason for its usefulness.