Main features of Budget of Bihar

Total receipts (excluding borrowings) for 2017-18 are estimated to be Rs 1,37,176 crore, an increase of 9.5% over the revised estimates of 2016-17. In 2016-17, total receipts exceeded the budgeted target by Rs 1,163 crore. This is primarily on account of an increase in grants received from the centre to implement the National Food Security Act, and the Mahatma Gandhi National Rural Employment Guarantee Act, among others.

No tax proposals have been made in the budget. Note that the Goods and Services Tax (GST) is expected to be rolled out in 2017-18. It will subsume some taxes such as Sales Tax and Entertainment Tax (unless it is levied by local bodies).

Government expenditure can be divided into

Total capital expenditure of Bihar is proposed to be Rs 37,483 crore, which is an increase of 2.8% over the revised estimates of 2016-17. This includes expenditure which leads to creation of assets, and repayment of loans, among others. The Department of Rural Works had the highest allocation for capital expenditure at Rs 8,332 crore, followed by Energy with Rs 5,810 crore.

Total revenue expenditure for 2017-18 is proposed to be Rs 1,22,603 crore, which is an increase of 3.7% over revised estimates of 2016-17. This expenditure includes payment of salaries, administration of government programs, etc.

Main Features of the Budget :

The key departments of education, rural development, rural works, energy, health and road construction got a major thrust in the state’s budget. Chief Minister Nitish Kumar’s ‘Saat Nischay’ (seven resolves) which has found its place in the budget document. Most of the schemes in it were launched by the government in 2016 itself. As far as seven resolves are concerned, adequate allocation has been made to the respective departments to which the seven schemes are linked.

These seven commitments are — 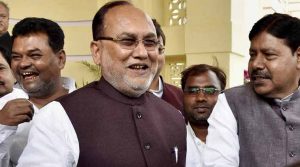 (i) Arthik Hal, Yuvaon Ka Bal (Economic solution is the strength of the youth),

Rs 2,436 crore has been allocated for the Mid-Day Meal Scheme, a two-fold increase over the revised estimates of 2016-17.

Rs 5,927 crore has been allocated for housing, which is 12% higher than 2016-17. This includes allocations for Indira Awas Yojana (now known as Pradhan Mantri Awas Yojana (Grameen).

46% of the Department’s allocation (Rs 5,095 crore) is estimated to be on revenue expenditure, which includes subsidy on electricity.

Rs 5,810 crore has been allocated for investment in state power corporations, and loans for power projects. This is 30% less than 2016-17.

Allocations for urban and rural areas include funds for schemes such as National Rural Health Mission. These funds are used for maintenance of hospitals and salaries for doctors.

Rs 819 crore has been allocated for capital expenses, such as construction of hospitals. This is 10% less than 2016-17.

The expenditure on pensions is expected to increase by Rs 3,592 crore. This may be on account of the proposed implementation of the Seventh Central Pay Commission recommendations.

The expenditure on pensions is expected to increase by Rs 3,592 crore. This may be on account of the proposed implementation of the Seventh Central Pay Commission recommendations.