Tourism and cities of Bihar

Amongst the most famous places in Bihar is Gaya, which is a Hindu pilgrimage hub and a transit point for Buddhist pilgrimage centre of Bodhgaya. It is believed that it was here under the tree that Buddha attained enlightenment. Gaya is a busy city situated on the bank of River Phalgu and it is replete with many temples and historic sites dating back to different eras that stand as the evidence to the successful rule of Maurya and Gupta dynasty here. The glory of Gaya was extended so much so that even Hiuen Tsang could not resist mentioning it in his travelogues.

Probably the oldest university in India, Nalanda is an important site to visit in Bihar. A perfect reminisce to the time of flourishing Gupta and Pala period, Nalanda is an acclaimed tourist attraction in Bihar. It is believed that the last and most famous Jain Tirthankara, Mahavira spent 14 monsoon seasons here. Even, Buddha is said to have delivered lectures near the mango grove in Nalanda. The fame of this education centre was to an extent that Hieun Tsang, the famous Chinese traveller visited here and stayed for atleast two years here. Even, I-tsing another famous Chinese voyager stayed at Nalanda for about 10 years, AND such was the glory of this place.

Dubbed as the seat of Bihar School of Yoga, Munger is yet another place that is popular amongst the tourists in Bihar. The history of Munger dates back to Aryans, who called Munger the ‘Midland’ for their settlement. For yoga buffs, Munger is not an unknown name, thus we can expect a large foreign crowd thronging this place. The present day Munger is a twin city, which comprises of Munger and Jamalpur. Reckoned to be one of the oldest cities of Bihar, Munger was once the capital of Mir Kasim before it fell into the hands of British. The place has several historic relics that further add to the charm here.

Vaishali is an important archaeological site that was once the capital city of Licchavi rulers. Vaishali earned fame as a birthplace of last Jain Tirthankar Lord Mahavira. It is believed that Mahavira was born and brought up in 6th century BCE in Kundalagram of Republic of Vaishali. Another major event this place was a witness to was the last sermon of Buddha in 483 BCE. Vaishali was a prosperous kingdom during the time of Buddha, it is also known for its beautiful courtesan Amrapali. So, you see, one has enough to recall in Vaishali and adding to its historic charm is the well-preserved Ashokan Pillar. This ancient city finds mention in the travel accounts of eminent Chinese travellers like Fa-hien and Hieun Tsang.

Situated on the southern bank of Ganga, Patna is the largest city of Bihar. Better known as Patliputra in ancient India, the city is also believed to be the one of the oldest continuously inhabited cities in the world. Patna is a pilgrimage for Sikh devotees as it is reckoned to be the birthplace of last Sikh Guru, Guru Gobind Singh. The city flourished in the period of Haryanka, Nanda, Mauryan, Shunga, Gupta and Pala earned fame all across India. Today’s Patna is a developing city, which is endeavouring to match up to the modernization; malls, high-end hotels and theatres have cropped in the city. However, Patna has to speed up a bit to become the part of other cosmopolitans. Altogether, Patna is a decent destination, with most of the modern facilities available.

Also known as Vulture Peak, Griddhakuta Peak is situated in Rajgir, Bihar. This peak is the most famous place to visit in Rajgir and its sits at an elevation of 400m. It is called a Vulture Peak due to its shape and frequent visit of vultures. The place hold an important position in history as it is reckoned to be the spot where Lord Buddha preached the Lotus Sutra in order to convert Mauryan King Bimbisara. It is also believed that Buddha started the second wheel of law and delivered several sermons here. The peak has a Peace Pagoda said to have been built by Buddhist of Japan. There are couples of caves here as well that further enhances the thrill of reaching here by a chairlift.

Built in 1545 AD in the memory of Emperor Sher Shah Suri, this tomb is an excellent example of Indo-Islamic architecture in India. Architecturally splendid and erected at the middle of an artificial lake, this sandstone structure is worth a visit in Bihar.

Estimated to have been built 100 years ago, Janki temple is situated in Sitamarhi, Bihar. Sitamarhi is regarded as the birthplace of Sita, the consort of Lord Rama. It is believed that Janki Temple is the place, 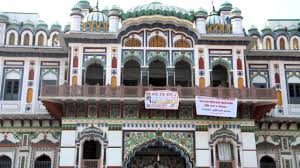 where Sita was born and in order to mark this event, a temple was constructed here. The temple has a welcoming gateway and large courtyard that can accommodate a massive number of devotees. Also a pond nearby called the Janki Kund is a place of interest for devotees as well as tourists.

Reckoned to be the tallest and largest Buddha Stupa in India, Kesaria Stupa is one of the major attractions of Bihar tourism. The stupa is believed to have been built between 200 and 750 AD under the rule of Raja Chakravarti. With a height of 104 feet, it is an imposing structure that must be visited during a visit to Bihar.

Thai Monastery is another incredible gem from the treasure chest of Bihar. Established in 1957 with the help of Thailand’s government and Indian Buddhist monks, this temple is a must-see in Bodhgaya. Made in typical architecture style of Thailand, this temple reflects the culture and traditions of Thailand.

An important Jain pilgrimage, Jalmandir is situated in Pawapuri, Bihar. Jalmandir has been revered highly by Jain devotees as it is believed that it is the place where Lord Mahavira breathed his last in 500 BCE. It is reckoned to be the cremation ground for this last Tirthankara of Jain sect. The legend has it that, the demand of Lord Mahavira’s ashes was so high that a large amount of soil had to be eroded from around the funeral pyre that a pond was created here. A white marble temple was constructed and it has remained an important Jain pilgrimage in Bihar.