The Bihar Panchayati Raj Act was enacted in 2006 after the state was divided into Jharkhand and Bihar and a separate Panchayati Raj Department came into existence in 2007. 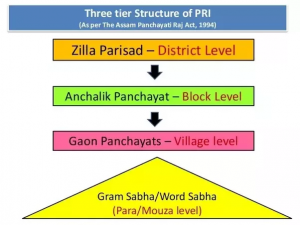 Th e Panchayati Raj Department (PRD) in Bihar came into existence in 2007. It mainly interacts with two ministries at the central level — the Ministry of Rural Development (MoRD) and the Ministry of Panchayati Raj (MoPR). PRD is considered an important department not only because of the quantum of funds that it handles but also because its activities have a direct bearing on rural development and poverty alleviation. It is also the nodal department through which attempts are made for grassroots democracy and decentralization of power through PRIs which have become the fulcrum of all development activities.

PRIs at the district, block, and village levels are the Zilla Parishad, Panchayat Samiti, and Gram Panchayat respectively.

The seven SCs at the block and district levels are:

Apart from SCs, there are also government functionaries who assist the Panchayats in carrying out their functions at each level.

Bihar is connected by the Bihar State Wide Area Network (BSWAN). All the blocks have access to computers and have Internet connectivity. Approximately 6,000 Common Service Centres are functioning at the village level; these are managed by Srei-Sahaj with the overall monitoring being done by Beltron. Under BRGF, the state has set-up a helpline for Panchayat systems and services. All the blocks have a facility for 2-way video conferencing. At the district level, PlanPlus Software is used for decentralized planning.

CB&T in the state is carried out for PRI representatives either directly through DPR or through the Bihar Institute of Public Administration and Rural Development (BIPARD). The training is imparted through a resource pool of Master Resource Persons (MRPs) and District Resource Persons (DRPs) developed by the department. The state recently revived nine Extension Training Centres (ETCs) called the ‘Mukhia Sarpanch Training Institutes’ (MSTIs) in Patna, Muzzafarpur, Darbhanga, Saharsha, Gaya, Munger, Bhagalpur, Purnia, and Sivan. BIPARD has plans of starting four ETCs in Patna, Bhagalpur, Purnia, and Muzzafarpur and the process of acquiring land for these at Purnia and Muzzafarpur is currently underway.

A few programmes are directly related to the strengthening and capacity development of PRIs:

The World Bank funded a 5-year project for strengthening Bihar’s Panchayats with a grant of US$ 160 million. At the time of the field visit pre-project activities were being carried out for this project. These comprised of various research studies while project implementation activities were scheduled to begin in 2011. Some of the major activities under this programme are construction of buildings for Panchayats, training and capacity building, and research.

The programme has seven key components:

Currently, it is envisioned that the project will be implemented in six districts, three of which are from the Kosi flood affected areas while the other three are Patna, Bhojpur, and Nalanda. PRD has requested an additional $120 million to enable the construction of Integrated Panchayat Buildings across the state. A separate society, the Bihar Gram Swaraj Society, has been formed for implementing this project.

The Backward Region Grant Fund is a special gap filling fund implemented by MoPR, GoI in 250 identified most backward districts in the country. This is being implemented in 36 districts of Bihar. Under this scheme, each district receives Rs 1 crore per annum towards capacity building activities which can involve CB&T infrastructure as well as implementing training.

MoPR  is currently implementing the CDLG Project in seven states, including in Bihar with support from UNDP. CDLG is aligned with the goals and objectives of NCBF, and aims to strengthen institutions and processes at various levels so that a behavioral change can be brought about through increased motivation, joint decision-making, the provision of resources (that is, networks, resource persons/institutions, training courses/material, information, innovative solutions, and methods), and personal empowerment. The key partner institutions in this are training institutions, such as the State Institutes for Rural Development (SIRDs), the Panchayati Raj Training Institutes (PRTIs, existing in a few states), and Administrative Training Institutes (ATIs), which have the mandate to train ERs and offi cials in local governance.

Under the Panchayat  Mahila  Evam  Yuva  Shakti Abhiyan, an association for EWRs, called Shaktirupa has been formed which is registered under the Societies Registration Act, 1860. The main objectives of this society are building the capacity of EWRs and ensuring larger participation of women at the district as well as state levels.