A sound infrastructural base is a key for economic development. The availability of adequate infrastructure not only promotes rapid industrialization, it also improves the quality of life of the people. Therefore, the state government is very much focused on development of high quality infrastructure to sustain the economic growth of Bihar. The public investment in infrastructure has increased manifold in the state, with increased private sector participation. The infrastructure encompasses the whole spectrum of vital services such as roads, railways, civil aviation, telecommunications, and energy sector etc where as institutional support comprises of educational institutions, technical institution, banking and financial services and dedicated government organization etc. 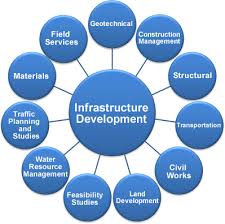 The extensive road network integrates the rural economy with the relatively prosperous urban centres and it also improves people’s access to facilities like schools, hospitals and markets. The state government is also developing a Road Construction Vision 2020 to ensure smooth road connectivity throughout the state.

The road transport is the most preferred mode of transport, compared to rail and air transport for both freight and passengers. It plays an important part in propelling economic development and social integration of the state. The number of registered motor vehicles in the state has increased rapidly, at an annual rate of 12.2 percent during the last five years (2010-15). As per the Year Book of Road Transport 2013, Bihar was the second fastest growing state in India (16.2 percent) in terms of registration of vehicles during 2009-13.

Heavy industries, major cities and large markets are linked by rail route network. The railways also provides a less costly mode of transport for both goods and passengers. All old districts Headquarters of the State are well connected by rail. The State is served by Eastern Railways and North-Eastern Railways in South Bihar and North Bihar Respectively.

As an infrastructure segment, airways plays vital role in facilitating the growth of business and economy. A robust civil aviation set-up is a key to seamless flow of investment, trade and tourism, with significant multiplier effects on the growth of the economy. Patna the Capital of Bihar is on the route from Delhi to Calcutta. It is also connected from Mumbai by air. Regular air services are available from Patna to Ranchi, Lucknow, Kathmandu, etc. All districts Headquarters (except those recently created) are having landing Facilities for small aircrafts.

Electricity now has become necessary for all the facets of life and has been recognized as a basic human need. Economic growth also depends upon the availability of adequate, reliable and quality power at a competitive rate. It is a key to accelerate economic growth, generation of employment, elimination of poverty and human development. The total generation capacity availability of power as on March 2015 for the state was 3704.63 MW. Out of this, 83.5 percent is from coal based thermal power, 14.12 percent from hydro power, and the balance 2.3 percent from renewable energy sources. In terms of ownership, central sector has the largest share of 77.9 percent, followed by the private sector/IPPs (14.7 percent), and state sector (7.4 percent).

Education is an equally important a component of economic development as others. Besides its intrinsic value, education also helps people to acquire knowledge and skill, and enable them for fruitful economic and social participation. With greater reliance on technology-intensive inputs in manufacturing and production, the need for highly specialized skill and knowledge is always high for spurring economic growth. Education also plays a significant role in developing a modern society. All these contribute towards economic growth and human development.

With the promulgation of Regional Rural Banks (RRB) Act of 1976, the regional rural banks came into existence. With equity holdings by the central government, the concerned state governments and the sponsoring banks in the proportion of 50:15:35, respectively, the RRBs provide a multi-agency approach for agricultural and rural credit in India. At the end of September, 2015, Bihar had 2058 RRB branches; in September, 2014, the number was 1889. Of the three RRBs in Bihar, Uttar Bihar Kshetriya Gramin Bank alone accounted for 50 percent of the total RRB branches in the state.

The success of planning depends largely on the availability and the supply of economic information, Economic Investigation (E.I.) division in this Institute since its very inception apart from rendering general consultancy services played a significant role in providing economic information. The E.I. Division conducts feasibility surveys of selected industries and product as also the Industrial potentialities surveys of selected areas. At present there are 38 districts in the state. MSME-DI is making all out efforts to conduct industrial potentialities surveys of each of these districts. As a result Bhojpur, Aurangabad, Nalanda, Shekhpura, Jehanabad, Rohtas, Jamui, Munger, Nawada, Lakhisarai, East Champaran, West Champaran, Banka, Gaya, Buxar, Patna, Siwan, Muzaffarpur, Khagaria, Araria, Gopalganj, Darbhanga and Madhepura district have been already surveyed & reports have been prepared by MSMEDI. It is proposed to conduct feasibility surveys of all other newly created districts of the state Feasibility study reports of setting up industrial Estates/Area are also conducted by MSMEDI. So far 3; Industrial Estates and 32 Industrial Area Reports have been prepared. Such reports are prepared at the request of the state Government.

Being fully aware of the fact that industrial sickness in the state has emerged as serious problem, this institute is also engaged in conducting sick units studies and prepares rehabilitation schemes. More than 1000 sick unit cases have been studied by this Institute so far. Besides, the division also provides advice assistance and information to new entrepreneurs for setting up their units in the state. Director, MSME-DI, Patna is the convener of State Level Committee constituted for the rehabilitation of sick MSEs units by the Govt. of Bihar in place of Apex Body. In this capacity MSME-DI, Patna receives applications, Scrutinizes the papers, submits them in the State Level Committee meeting for discussion /decision. Thus MSME-DI, Patna is actively associated in rehabilitation of sick MSEs Units.

This Division also organizes motivational campaigns at different places to motivate prospective entrepreneurs for setting up their units. In these campaigns the units are registered on the spot and NSIC and other participating agencies also provide them necessary assistance.